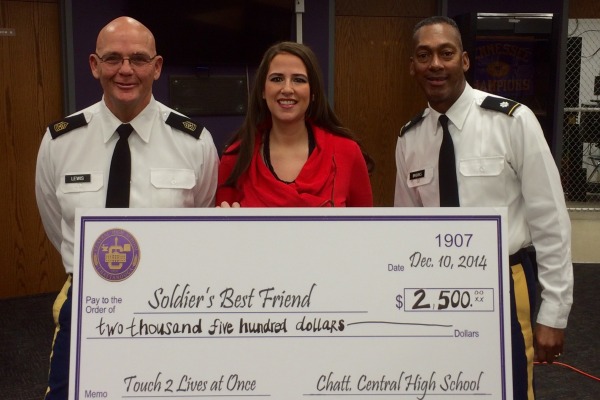 A CHECK LARGER THAN LIFE -- Ms. Thomas presented this check to her psychology students with (from left to right) Sergeant Major David Lewis and Lieutenant Colonel Bill Brooks.

After many hours of fundraising and drawing awareness to soldiers who suffer from Post Traumatic Stress Disorder, Ms. Lauren Thomas and her psychology students raised $2,500, the cost to train one service dog. After training, the dog is given to a veteran suffering with Post Traumatic Stress Disorder. She and her students worked tirelessly in order to give back to those who have given so much to them.

“A number of things inspired me to help this organization. Around the time of the remembrance of the 9/11 terrorist attacks, we were going over PTSD in psychology. On the news, I heard a story about a man named Neil Grehlinger who was traveling around the country raising money for awareness of an organization that helped suffering veterans adjust to normal life by giving them a trained dog that would otherwise be euthanized,” explained Thomas, who has been teaching at Central for nearly eight years.

As inspired as she was by this story, however, the memory of her father, Jimmy Thomas, is what gave her the drive to carry through with this project.

“My dad was in the army. He served time overseas during the Korean Conflict. Even though he is gone, this is something for him. He was never diagnosed with PTSD, but I think he dealt with it because there is no way that you can go to war and not come back changed,” she added.

In October, Thomas and her third and fourth period psychology classes got right to work. They gained publicity inside and outside of the school. While Thomas spoke to countless news and radio stations, her students spread the word through the hallways by word of mouth, announcements, and even holding up posters at a pep rally as she informed students, teachers, and administrators about the organization. Word spread and donations large and small poured in.

They reached their goal this week on Wednesday, December 10. That same day Thomas presented a check to her psychology students. She showed them that all of their advertising and time outside of class was worth it. WDEF News Channel 12 as well as many other observers were there to capture the special moment.

Kris Teague, Soldier’s Best Friend’s Event Coordinator, could not be present for the ceremony but sent a message that Thomas shared.

“Soldier’s Best Friend is very honored to be the recipient of Central High School’s fundraising effort. The donations received will go towards helping pair, train, and equip our veteran and rescue dog teams,” she read.

Then she expressed her thoughts.

“My kids at CHS helped me to see that you and your generation cannot be lumped together as ’empathetic’. You helped me to realize that given the opportunity to help others, your generation can do great things. I got to see your hearts, your critical thinking skills, and your care for the world around you.  Thank you for showing me that there is hope for our future,” she said with tears in her eyes as she stood before the room full of people.

Tanya Arkushenko, who is a sophomore and a student in Ms. Thomas’ fourth period psychology class, was overjoyed about their accomplishment.

“We started out with nothing, but we went to work right away. We did so many things, even put away time everyday in class to work towards our goal,” she said in retrospect.

Tanya also went on to say how this project has inspired her.

“It showed me that I shouldn’t only care for myself but more for others, even if I don’t know them. It makes me feel good inside,” she said proudly.