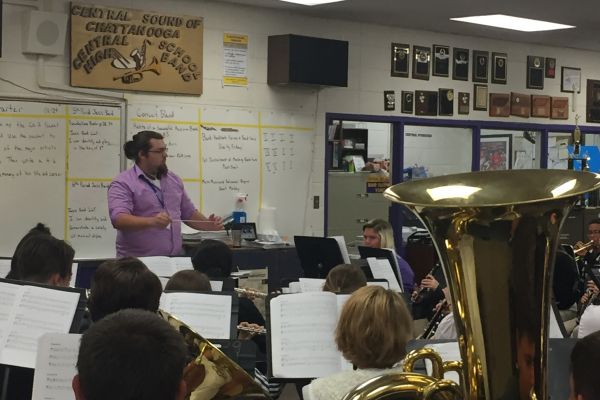 TREVOR WHITE JOINS CENTRAL FAMILY AS BAND STUDENT TEACHER -- Mr. White leads the band in a warm-up chorale before they start to work on the harder, more technical music.

As the new school year begins and students and teachers start to get settled in, everyone begins to notice new faces. For the Central Sound, they are always gaining new members, but they have never gained a member quite like this. This ‘new member’ is not a student that attends Central, but a student teacher from The University of Tennessee at Chattanooga.

Like most band students, music changed his life early on.

Mr. White grew up in Spring Hill, Tennessee, and went to Spring Hill High School. He graduated in 2013, but did not decide to major in music education right away.

“When I was in middle school, band changed my life and everything revolved around music,” explained White.

White knew that this was his calling, especially after he tried to go to college for different majors. Eventually, he went back to what he loved, which led him to Central.

“When the other majors I tried did not work out, I came back to what  I knew and loved, and I want to pass that on,” noted White.

Since being here at Central, he has complemented the band and Central’s band director, Mr. Josh Bloodworth. White has also had the opportunity to take Bloodworth’s spot some days in conducting and teaching the band; much like a student teacher for an English or Math class would.

“You all work very hard, and in the end, it is the effort that counts the most. I also love Mr. Bloodworth’s teaching style. It is very serious and unlike the style of  any high school band I’ve seen. It’s almost college level,” explained White.

After White leaves Central, he has to go to a middle school to observe and learn from the band director there. He is not sure if he wants to teach at the middle or high school level at this time. White is very optimistic, and says that he will decide when he gets done teaching here and at the middle school he is assigned to.

“The original plan was to teach high school, though now I’m not sure. Both levels are definitely an option; I’ll just have to see where things take me,” concluded White.