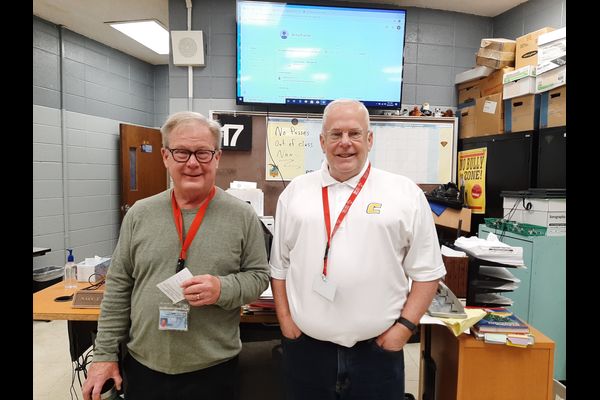 For his own planning, Cuttle expects it switch to last period for at least the next nine weeks. That was not a major change for Cuttle in regard to his business students; he had an extra planning period during the first period of the school day.

“As a new teacher, I appreciated the extra planning hour. However, I understand there was a gap to be filled and I’m more than happy to help,” said Cuttle.

Cuttle has taken four years of French in high school and has visited France three times. He believes this will help him to assist the French students in his new first-period class. Former French instructor Amie Wilson no longer teaches at Central High; students that began taking French last year must continue in Edgenuity this year in order to meet foreign language requirements for graduation. He is only able to help with math up to ninth grade geometry, which is helpful to most of the students in Snyder’s class for Edgenuity.

According to Snyder, the biggest change in his day is his extra planning hour. He is using this newfound time to create lessons for the geometry class and finds it easy to plan in accordance with the district’s set of learning material.

“Blended learning style is my favorite, and I get to use that with geometry. Geometry is my favorite class to teach,” said Snyder.

Snyder is working on building rapport with his new students, as only three in the class are familiar with him. He is also building communication with Cuttle to help him overcome the learning curve of Edgenuity. Cuttle has the ability to interact with students progress by unlocking students’ assessments and will become more familiar with the system as time goes on.