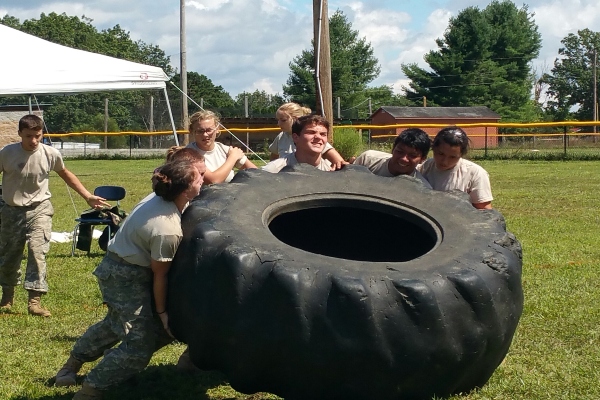 CENTRAL TO PARTICIPATE IN ZACH ATTACK 5K MEMORIAL RACE IN HONOR OF ZACH SCHAFER — JROTC students are depicted competing in the event during a previous year.

Many students have come and go throughout Hamilton County Schools over the years, however, very few have left such a positive and impacting legacy as that of Zach Schafer. As the month of March draws near, many schools throughout the county are beginning to prepare for the race held in his honor, the Zach Attack Memorial 5K.

Schafer attended Soddy Daisy High School from 2016-2017. He was a JROTC cadet who enjoyed the program and loved competing on most of the course that is being used for the event.

“This will not be an easy course, and the training and preparation for this event will not be easy. I believe that the young men and women from Central High School who step forward and tryout will have a lifetime opportunity to challenge their body and minds,” explained Major David Spencer, Central’s JROTC-Army instructor who is in charge of the race tryouts.

The race will contain over 20 challenging obstacles on the JROTC Raiders State Competition training course at Soddy Daisy High School. The event is held every year in Schafer’s memory, and all proceeds go to his memorial fund.

Central High School will be participating in the race at Soddy Daisy High School with a team of five students. Try outs are being held every day after school from 2:30 to 4:00 pm until March 6.

Central’s JROTC program has decided to organize a team because the event is a great cause to support the Zachary T. Schafer Memorial Fund.

“I am running [the race] to help support the cause, and I am also looking forward to a new and exciting experience at the tough and testing obstacle course,” shared Senior Kaigen Mulkey, a student trying out for the team.

The JROTC instructors and Central students participating in the race are eager to train and compete in the memory of Zach Schafer. The competitors are working hard towards success on the course and will train to continue Schafer’s positive legacy and outlook on the world.

More information about the race can be found at https://www.itsyourrace.com/event.aspx?id=12280.