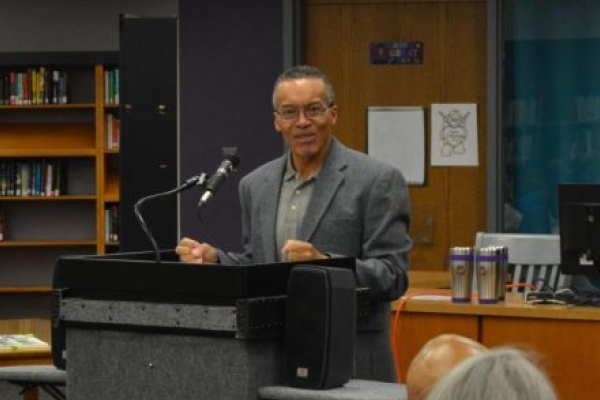 Central’s classes have taken efforts this February to celebrate and honor black history month; art classes have experienced the history of African American face jugs, and history classes have had the opportunity to hear the experiences of one of the first African Americans to graduate from Central High School. Reuben Justice graduated in 1969 from what people call “old Central,” which is the original building that was on Dodds Avenue, not the Highway 58 location.

Sophomores Jack Graham and Airicka Richardson reached out to Justice in order to set up an interview, but, when the administration heard of this opportunity, they invited him to speak to all the history classes at Central. Justice used this opportunity to tell students about his childhood and what it was like to attend Central High School at the time.

Even though Justice was born in a small town in Alabama, he grew up in the Antioch community in Chattanooga, and he was a member of Antioch Missionary Baptist Church. He described his community as a tight-knit place where everyone knew one another. Justice expressed that he hopes all students have an opportunity to have a good relationship with their community as he did growing up.

“All the parents in that community raised me,” revealed Justice.

“The relationship in that school was very cooperative and wholesome… Through all of my growing up I had very supportive environments,” explained Justice.

“When I heard I would have to go to another school, it wasn’t a big deal for me because I had a solid foundation,” stated Justice.

Before Justice attended Central High School, he had not been around white students in school or in public places, for Justice lived in a time when many places were segregated. So, Justice became one of approximately 30 African Americans who integrated the Central student body that numbered about 1,700 at that time (from 1966 through 1969).

“Central High School was a monument in the community… Central students came from everywhere,” explained Justice.

Despite the stigma around school integration in the 1960s, Justice described his time as a quality, rewarding experience. Even though there were some struggles, and there was racial tension, Justice’s high school experience prepared him for what was to come.

“Ms. Ogle was my eleventh grade language arts teacher. It was challenging, what she expected of us, but what she required helped me,” expressed Justice

Like every student at every school, Justice did face some difficult days and ran into some problems. Justice told the students that most teachers and students were respectful to him and the other students integrating the school. While at Central, Justice participated in football and wrestling.

“I would say sports are was one of the biggest encouragers of integration because teams wanted athletes, and there were some good athletes,” explained Justice.

Many students were curious about how he dealt with segregation outside of school while he was integrating Central. He explained that it was just something he had to deal with.

“The one thing that stands out to me most at Central is that, during that time of school, unrest in the nation, as well as Tennessee, the majority of Central students and staff— black and white— were very positive,” expressed Justice.

Overall, Central was a rewarding experience for Justice, and he encouraged students to make their high school experience as positive as possible. He hopes students’ experiences at Central are something that will prepare them for higher education, as well as what the rest of their life has to offer.

When students heard about Justice’s experience and his outlook on Central, they were quite surprised.

“I think it was very cool because when I think of school in the 1960s, I think, ‘[it was probably] very segregated.’ When he said Central was a good experience, I found it very interesting,” stated Breanna Stamey, a Freshman at Central.

After graduating from Central in 1969, Justice went on to attend Middle Tennessee State University and studied Business Administration and English.

After retirement, Justice continued to show his passion for students and the schools when he became an independent contractor. While working for the school system, he served as a “school or school district appraiser.” He also served as an Interim Director of Middle Schools for Hamilton County.

Justice still resides in Chattanooga, where he is active in his church and community. His fond memories of Central include the influence of some of his teachers: Coach Stan Farmer and Marjorie Ogle.

When Justice’s time speaking to Central students came to an end Wednesday morning, he said, “I think it’s important for students [to know this] because it’s not just about what I know. There’s difficulties and hardships they need to overcome, and when they overcome those difficulties, they begin to make more accomplishments… It’s a learning process.”