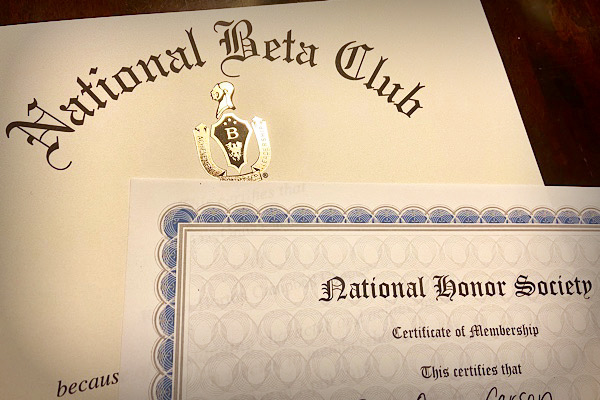 NATIONAL HONOR SOCIETY AND BETA CLUB MEMBERS ARE STILL ON TRACK TO BE INDUCTED NEXT SCHOOL YEAR-- Although school shutdowns have produced many bumps in the road concerning school activities, Central's National Honor Society and Beta Club leaders are working hard to figure out the next steps in the programs.

It was recently announced that all schools in Hamilton County will remain closed and virtual learning will continue for the rest of the school year. This statement has left both students and teachers wondering about the status of organizations, sports, and clubs throughout the school. Two major organizations that Central hosts are the National Honor Society (NHS) and Beta Club, and, due to the current situation and lack of information, students are questioning whether or not the organizations will even continue next school year.

Both the National Honor Society and Beta Club are selective organizations that choose high school seniors who represent the highest standards of academic achievement, service, leadership, and character. These high school seniors are inducted into these organizations every year at Central’s Academic Awards Day. After the awards day was cancelled due to school closures, many students have been pondering the status of the National Honor Society and Beta Club.

Not much is decided yet regarding the induction process for next year’s selected seniors, but students can still turn in their National Honor Society applications until May 5 by emailing them to Ms. Moyer or Christina Cotreau. Students can also turn their applications in by dropping them off in the student turn-in bin outside of the school.

As for current seniors wishing to purchase NHS and Beta Club stoles for their cap and gown, all graduation plans and purchase orders have been put on hold, so the organization leaders have not done anything concerning stoles or purchases so far.

“Beta Club will continue in the 2020-21 school year. It will be kind of refreshing, like a fresh start. I’ll work with the administration in August and hopefully induct a new class during the first quarter. From there we can map out the year and decide what we want Beta Club to be,” shared Central’s Beta Club Sponsor Ryan Mallory.

Although most aspects of both organizations are undecided as of now, the National Honor Society and Beta Club leaders are working diligently to figure things out for both current and upcoming members. As of now, both organizations are set to induct new members and continue next school year. More information and updates will be released by the organization advisers and sponsors as more information is released regarding next school year.