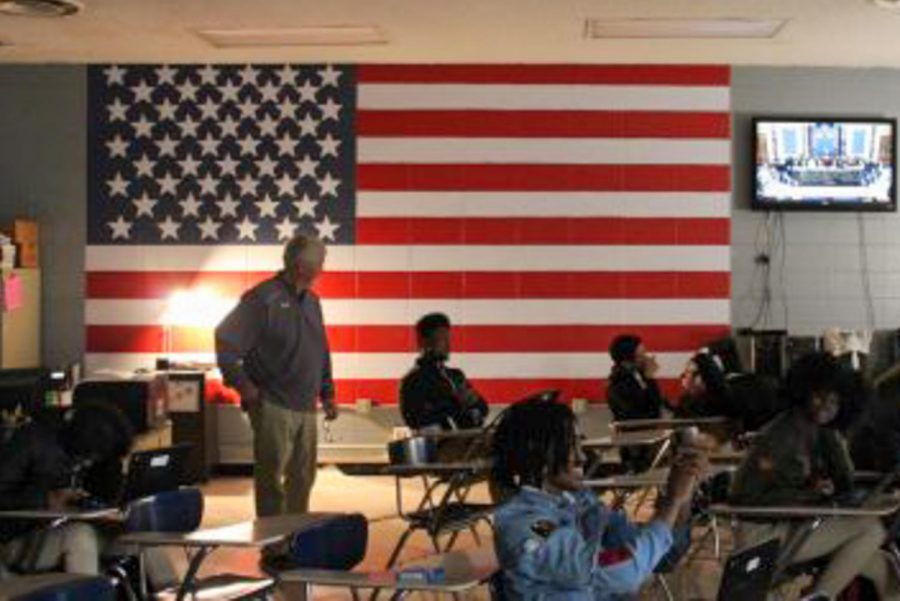 (file photo) -- Pictured above is a mural of the United States' flag in Mr. Massengale's room, one of the government classes at Central.

On Wednesday, August 11, 2021, Central High School was among the 15 Hamilton County Schools to be designated as Civic Seal Schools. Tennessee Governor Bill Lee recognized these schools during his State of the State Address at McConnell Elementary School. Across the state, 53 schools received this seal which, according to the Hamilton County Department of Education, recognizes schools and districts that prioritize teaching the United State’s history and civic values.

Schools earned the seal by incorporating civics and government lessons across grade levels, as well as teaching general information about the government and the founding of the United States.

“There were certain lesson plans and projects we had to complete to qualify. There was one piece that needed a collaborative effort between the social studies department and another department on campus. Ms. Hale in the English department was kind enough to teach her students a lesson that combined English and Civics,” according to Government teacher, Mr. Phillips.

He explained that Central’s success on the exam was due to many factors across the school, including the ROTC department, English department, and History department.

The senior class of 2022 took the U.S. Civics exam last week. The exam is a graduation requirement, and each student must retake the exam until they pass with a score of 85 or higher.

“I am proud of the hard work of Central’s Social Studies team and the students who took part in learning about our nation’s systems of government. Earning Civil Seal status is a big accomplishment for our school, and we look forward to working toward earning the goal for this school year as well,” Mr. Seals, history teacher, explained.