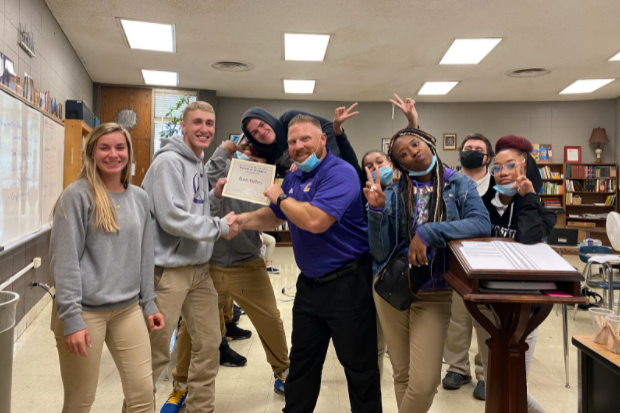 As the new school year has begun and things are getting kicked back into gear, students are settling into their classes and getting to know new or already familiar peers and teachers. Unlike last year, most students are back in school physically and now have an opportunity they didn’t have before: vote for a teacher of the month. This year’s first teacher of the month is Mr. Ryan Mallory.

Mallory has been teaching for a grand total of 15 years and has spent 9 of those here at Central. He graduated from O’Dea High School in Seattle, Washington before moving to Tennessee to play football at The University of Memphis. While at Memphis he majored in American Literature which he used to pursue a career as an English Teacher. Before teaching at Central, Mallory moved around some from Tennessee to New Jersey and even back to his hometown in Seattle.

Since landing back here in Tennessee, Mallory has learned a lot from teaching.

“It’s most definitely a people oriented profession; you have to be great with building relationships with students if you ever hope to be able to teach them,” he says.

Coming back from having to learn and teach over zoom classes last year, it feels like a breath of fresh air for Mallory. During online learning, he was still able to talk about his classes’ content and present to his students but the in-person feedback he’d normally get was really lacking. It wasn’t the ideal situation but he and his students managed together.

“I really missed the interpersonal interactions with kids,” Mallory states about teaching through Zoom.

As well as teaching Mr. Mallory also coaches. He coached Football at The University of Memphis for seven years and coached for one season his second year at Central. He has also been a Wrestling coach at Central for nine years.

“I really like how we get all kinds of people. Kids who would never normally be friends come together and become almost like family,” stated Mallory about his time coaching.

Mallory is very optimistic and has high hopes for this school year.

“Reestablishing relationships with students and getting that human interaction back and hopefully sparking kids interest in learning again,” explains Mallory on what he looks forward to most.

Mallory has had an excellent impact on his students and Central High School during these less than normal times. He’s gone above and beyond to help his students, build connections, and engage them in learning.