Following 2018 Election, Political Polarization Still on the Rise at Local and National Levels 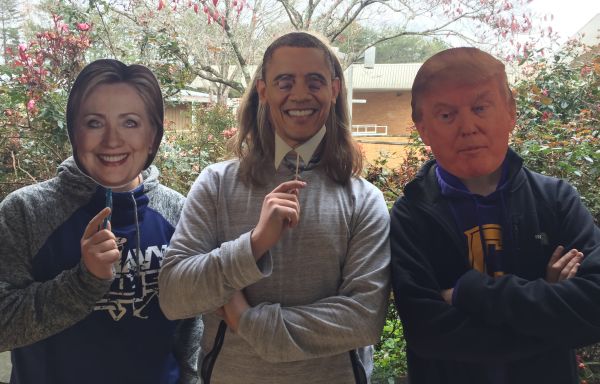 POLITICS HAVE BECOME EVEN MORE POLARIZED -- (Left to Right) Hillary Clinton, Barack Obama, and Donald Trump, have served as great leaders of the United States, yet sides fail to agree with the other.

The entire country was on the edge of their seats on November 6. Election day had come once again. It was time for the democrat’s blue wave as the republicans frantically tried to defend their territory. The election was hoped to be a so-called referendum on the Trump administration.

The results were mixed. The democrats gained control of the House of Representatives, by flipping over 30 congressional districts. However, the republicans kept control of the Senate, with the right even gaining two seats; it must be stated, though, that most of the incumbent democrats that lost were facing reelections in heavily conservative states, such as North Dakota, Missouri, and Indiana.

“Everyone is so obstinate in the south, especially the deep south where we are,” explained Senior Brittney Hoang.

Nevertheless, democrats were able to pick-up seats in Arizona and Nevada, but were unsuccessful in highly-publicized races in Texas and Tennessee. Marsha Blackburn (R) was able to fight off Phil Bredesen (D) in becoming the first female senator from Tennessee. Blackburn’s success came with staying close to the policies of President Trump with rhetoric about illegal immigration, the wall, and jobs, despite her unfavorable connections to the opioid and communications industries.

“There is no comparison [to other elections]. The rhetoric has never been seen before,” recalled Danielle Hooper, Central’s AP US Government and Politics teacher. “There’s so much hatred. People don’t want to listen and be engaged anymore.”

Attack advertisements flooded news cycles as both sides dumped money into exposing the negative aspects of the other candidate. Even local elections were not immune to the slander.

“Today’s political climate is full of drama and bashing the other side. It has become ineffective and completely polarized,” stated Senior Zeena Whayeb.

After the 2016 election, many were hopeful that future elections would not be as intensely heated. However, this wish did not seem to come true.

Even though the democrats now control the House, they have their own leadership crisis on their hands. The current top democrats are all in their mid to late 70’s. If progressive policy is going to come about, change has to happen. That may need to start with leaders, at both the legislative and executive branches. This is especially prevalent leading into the 2020 presidential campaign season. Both political parties have been increasingly polarized, with each side refusing to work bipartisan to enact meaningful legislation.

“I’m hoping people will realize politics should not be biased. Politicians should realize the importance of multiple perspectives and learn to come to a compromise to benefit the majority and minority,” wished Whayeb.

“2020 is going to be even more expensive. My head’s gonna explode,” said Hooper. “I used to understand politics. It was once a beauty. Now it is ugly.”

For students turning 18 and legally now have the right to vote, it is imperative that your constitutional right is used. Our freedoms keep you safe. Our freedoms keep the Central Digest running as a member of the press. To put it simple as the slogan of the Washington Post states, our democracy dies in darkness.