Teacher Strikes Shine Light on the Education System in the U.S. 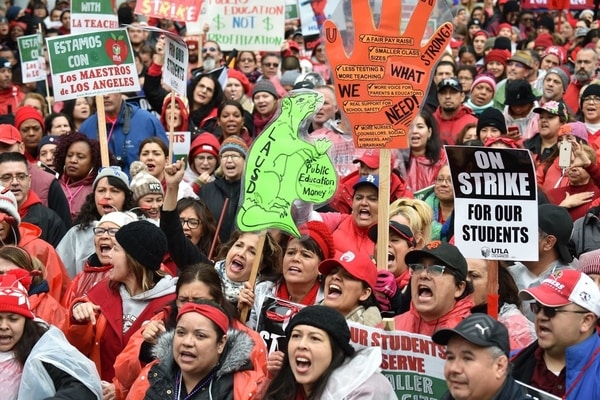 TEACHER STRIKES SHINE LIGHT ON THE EDUCATION SYSTEM IN THE U.S -- Teachers have taken a stand and have decided to strike against the education system.

Recently, a major uproar regarding education has been making headway in the media. About a month ago, in Los Angeles, California, the LA Teachers’ Union went on strike, with 31,000 teachers walking off of the job. As a result, the LA school district lost over $125 million, which has put immense pressure on them to make changes. With most schools in LA already being extremely understaffed, many schools placed students in either the auditorium or the gym, which is hardly adequate for actual lessons.

The current management is deplorable, with class sizes of up to 50 students. Often times, they did not even have enough chairs, which meant some students had to sit on the floor. Teachers there often are not paid enough to keep up with the high cost of living there, forcing many of them to have to get a second job to make ends meet. California spends about 13% less per student than the national average, which really shows what is going on in the school system there.

These kinds of issues in school are not unique to California, though. This is a problem going on with schools nationwide. Educational opportunities are not afforded equally to everyone, with differences in social class, school district lines, and spending per education per state all being major influences. In secondary school, the US national average for class size is 26.2 students per teacher. According to the Center for Public Education, having any more than 18 students per teacher in a classroom has a major negative impact on test scores and learning. Compare this to the 50 students per teacher in LA, and you start to see how this is a major issue. Even statewide for California, the average is 32 per teacher, which is still way more than the recommended class size. Even still, take a state with one of the smallest class sizes compared to the nation, Wyoming, and you’ll see there is a 19.6 per teacher average, which still doesn’t meet the 18 students recommendation.

If we look locally, educators have their own opinions about the current state of education.

Mr. Finley King, who has been principal at Central High School for several years, has some opinions about the state of education, and what he believes some of the current major pitfalls, citing standardized testing as one major issue.

“I think because people are trying to hold schools so accountable for ensuring students are successful, that its caused a lot of pressure to be put on states for high test scores. That has filtered down to schools and schools systems. Those schools are feeling pressure because they want their schools to perform, and they’re having that pressure filtered on down to students to perform well on standardized tests. A standardized test is great, but it doesn’t always measure success in the classroom,” said Mr. King, pointing to standardized testing and pressure on schools as a harmful roadblock.

King believes that all kids are different in their own ways which means they all have unique ways of learning and retaining information. With this dilemma it is much more difficult for students to achieve the standards that HCDE requires for standardized tests.

“A standardized test means that you have standardized kids, and we don’t. All of our students are different, and come with different tools in their toolbox. As educators, we are charged with getting the same results with every single student, regardless of the background they have. Not every student goes home to the same environment. Not every student has adults that are supportive of their education and their academic experiences. Believe it or not, students are with their parents and at home more than they are with us. But we’re expected to fix all these problems and to level out everything and to get everyone to perform at the same performance level, which is an impossible task.”

Another Central educator, Ms. Coteau, had different ideas as to what the biggest issues of the public education system is.

“It’s not just in this education [system], it’s a societal thing. We like to be entertained. We spend billions of dollars on movies, and you have billionaire movie stars, but teachers are working two or three jobs to make ends meet, and that’s messed up,” Cotreau added.

Overall, it’s clear that something needs to be changed, but an agreement has to be met before anything is done. We need to decide where to get the money needed for teachers and schools, how to decide what it is used on, and how much is needed. Until we do that, no change or progress can be made to fix this nationwide issue.