Editorial: Testing is Having a Negative Impact on Student Success 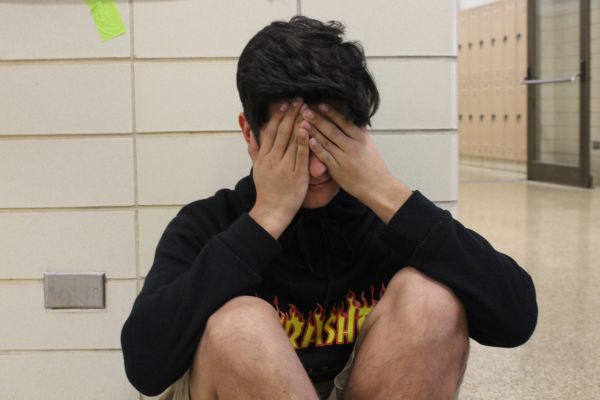 HOW IS TESTING AFFECTING OUR STUDENTS? -- Dimas Azuca, pictured above, stressing in the hallway during testing season.

This year at Central, it appears that students are having more testing than they have ever seen before. Testing can be used in many positive ways, and is almost necessary to see how well students are obtaining classroom material. However, testing can be overwhelming at times for students. Some students think that the testing is too much and puts too much pressure on them.”This year, we are doing more testing than I’ve ever seen before. I don’t think that I have ever been this stressed out before,” said Junior Yahaira Villanueva

Another concern students may have is the low grades that they are making on the tests. These low scores can be good when compared to other students, but it can still be discouraging to see a low grade pop up on your screen after trying so hard to pass.

“I want to cry. Actually, I have cried. After hours of studying and still failing? Yeah, I think that’s worth crying over,” explained Sophomore Zoey Greene.

“Less class time for us I guess. We have not done work in English for what seems like forever. The lack of homework feels amazing,” stated Sophomore Taylor Hearrell.

To conclude, testing might be a necessary part of high-school life, but the benefits may not outweigh the negatives. Administrators should consider if the long testing periods are worth the stress and anxiety that comes along with it.