Students Ponder Whether or Not Donald Trump Will be Impeached 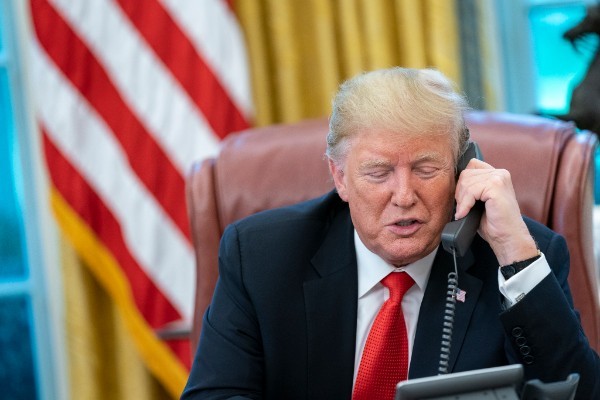 STUDENTS PONDER WHETHER OR NOT DONALD TRUMP WILL BE IMPEACHED -- It is close to the 2020 election and President Trump has been dragged into a serious investigation.

Every four years in the United States, an election is held to appoint a new president or renew the current president’s term. There are 21 people currently running for president, 17 Democrats and four Republicans. Donald Trump is the current president, and he has been under more fire than usual recently, as an investigation into impeachment has began.

Before he was in the limelight, President Trump was a real estate mogul and an ex-reality TV star on The Apprentice. Given his lack of experience as a politician, some Americans strongly oppose his leadership. President Trump has also received backlash for multiple controversial statements he has made over the years among other incidents.

Concerning the impeachment investigation led by Democrats, supporters of the inquiry believe that the president has illegally withheld military aid from Ukraine by pressuring their leader, Volodymyr Zelensky, for information on Joe Biden and his son during a phone call. President Trump allegedly inquired for condemnable evidence against the duo to tarnish their reputation while furthering his own 2020 election campaign.

This particular phone call was brought to the Democratic party’s attention by an unidentified whistleblower, a government official who reported potentially illicit activities.

The whistleblower who released this information is working from secondhand and thirdhand information. He was able to confirm some of the knowledge himself, but half of the US officials informed him about it. Currently, there are laws in place to protect his identity from being exposed.

President Trump denied any allegations that were brought to him; he even offered to release a transcript of the entire exchange between President Zelensky.

If one is impeached from presidency, they are not necessarily removed from office. Impeachment serves as an indictment, or formal charge. Although the currently Democratically controlled House of Representatives decides whether or not the impeachment process will commence, the Senate, currently dominated by Republicans, holds the trial. Two-thirds of the Senate must agree with the impeachment of the president in order for it to become official.

Although a multitude of individuals see this investigation as an opportunity to remove President Trump from office, there are many others who do not see the phone call as a valid reason for impeachment. Even people that do not support Trump’s presidency are not fond of the idea of impeachment, as they believe that Vice President Mike Pence will be even more disagreeable if he were to take over the position of president.

“I do not believe that he will be impeached; I believe he will go on trial, but he probably won’t be removed from office,” revealed Senior Elena Salgado.

A number of people also do not believe that the timing of the investigation is the best. President Trump is nearing the end of his term, and impeachment is a long, complicated process. Such an investigation could shorten their holiday break.

“With the holidays coming up, I do not feel like politicians will want to disrupt citizens’ habits with the possibility of turning over the president’s power,” stated Senior David Rudek. “Also, by the time the impeachment investigation is over, he will have been in position for almost a full term.”

It is still early in the impeachment inquiry to determine what will happen. As of now, Congress is merely setting the rules under which the impeachment investigation is to be conducted under; President Trump has not been officially impeached. The outcome of the investigation could hurt either political party going into next year’s election; Republicans face humiliation and distrust if the president is removed from office, whereas Democrats face a huge loss if President Trump remains in his position.