Editorial: What is ‘Love’? 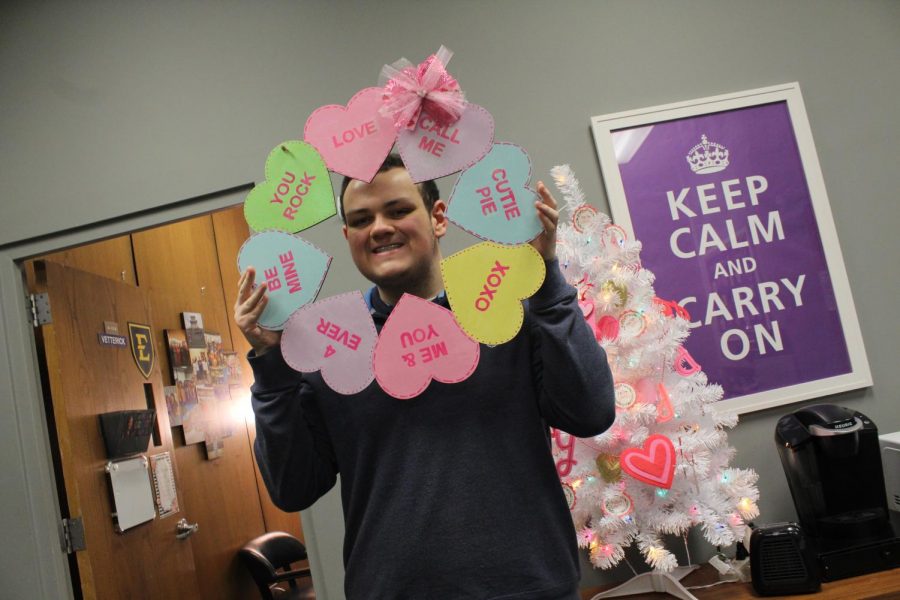 EDITORIAL: LOVE IS IN THE AIR AT CENTRAL HIGH -- Senior James Ortiz, viewed as the most lovable person at Central High, poses with Valentine’s Day decorations.

This time of year is recognized as a time of expressing love and friendship, not only in the U.S., but in other parts of the world as well; Central is no exception. With the romantic atmosphere at an all-time high, students and staff are able to testify if the feeling of “love” is real.

With that being said, knowing where the holiday originated is crucial to explaining the romance on display in the halls daily.

St. Valentines Day is perhaps named after a priest who performed marriages for young lovers, or may be named after a man who rescued many Christians from harsh Roman prisons.

The true hero of this holiday is derived from is still unknown; however, the more appealing explanation may be of an imprisoned Valentine who fell in love with the jailor’s daughter who signed his letters to her as “from your valentine.” Despite the many assumptions of who Saint Valentine was, he is now known as a selfless romantic who embodies the feeling of friendship and love around this time of year.

“Now, relationships are more serious; we should be past all of the drama. People take Valentine’s Day more serious because of that,” stated Senior Jasmin Ball. “It’s not what it was in middle school. It means more to me now because I know you can actually put effort into all of this.”

Not many people can testify that they have truly loved someone before; the meaning of the word depends on the person answering the question. High school students are still naïve as to what it means, but many believe they have experienced, and  understand what it means to be loved.

“It’s an aspect you’d want to keep, and you don’t want to lose,” said Alan Diaz, a senior at Central.

Public displays of affection, otherwise known as PDA, could be the demonstration of a couple’s love towards one another. The amount of PDA in a high school’s hallways is seen daily by many students and staff who wish to quickly unsee it.

“I have a whistle to blow for that. I think it’s awful. [School] is not the time or the place; [PDA] is inappropriate behavior,” said English 12 Teacher Kara Fannon.

“I don’t want to see it; especially if they linger. I don’t mind a peck on the cheek, but anything else is unnecessary,” added Adam Fletcher, also an English 12 teacher.

Adolescents’ current beliefs about love is unmatched to those who have had a significant other for years on end. Having been through life’s hardships can really test the question of love being real.

“Love doesn’t die— not until you die— it doesn’t die. There’s mad love, sad love… it’s all love. Sometimes you’re mad at who you love, but you still love them,” said Secretary LeeAnn Brock.

“When you have to work through stuff, it either brings you closer together or farther apart,” stated Economics and Government Teacher Scott Phillips.

To many, loving someone automatically signifies the affection being given and received from family and friends, not necessarily a significant other. It is said to be a type of love many more people can relate to, especially teenagers.

“We all need love to survive one way or another. Whether it’s loving yourself or loving your family, you need love in your life,” stated Elena Salgado, a Central senior.

Others believe that it is not equally reciprocated. The love they have for their partner is stronger than that for their family. It all depends on what they value, which differs from person to person.

“I don’t think you can love your family as strong as you can love a significant other. It shouldn’t stop someone from caring for their family, though,” said Senior Brandon Henderson.

The way one loves should not be looked down upon by those who do not understand it. The many definitions provided for the word are defined by “affection,” and whatever that may be for one person could be different for the next.

Ultimately, the love for one other, whether it is that of romance or caring, exists and is very much real. It just depends on the person’s willingness to give and accept it.