Editorial: Should Students Be More Involved in Politics? 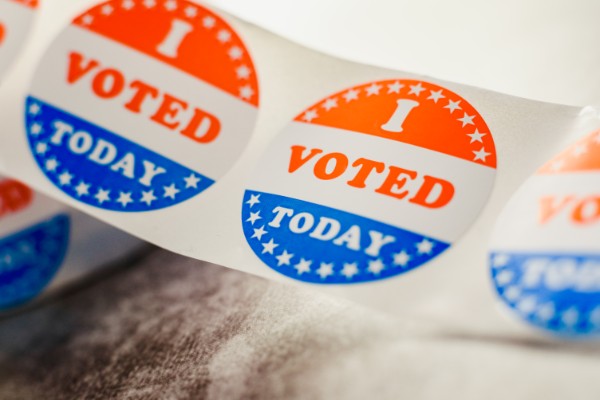 SHOULD STUDENTS BE MORE INVOLVED IN POLITICS? -- Depicted above is a roll of "I voted" circular stickers on a gray background for the November elections in the United States.

The 2020 elections are slowly creeping up on voters as they try to decide which candidates they will support and which they will vote for. Presidential elections typically see a little over 50% of the voting age population participate, while midterm elections see around 40%. Voter turnout has fluctuated throughout the years, but, overall, the number of participants is increasing.

The number of voters often fluctuates depending on the candidates and the amount of money spent on advertising campaigns. If voters are well-informed about each candidate, they will likely be more prepared to make a decision at the polls.

First time voters, such as high school students who have just graduated, may have the hardest time making their decision. Voting can be exciting, but it can also induce anxiety in the minds of undecided participants. For senior students, this is the first election that they will be able to vote in, but are they ready for the elections?

Most students are inexperienced with elections and voting, which may hinder their motivation when it comes to being politically active and informed. Students can not depend on teachers or schools to provide them with information on current elections and candidates. Often students are discouraged from discussing politics with their teachers, and teachers are warned against discussing politics with students, as well, for fear of being accused of pushing an agenda. There are various other reasons for students’ lack of action in the field of politics.

“Some students are not active in politics because they believe the things happening in the government are not relatable to their lives,” explained Shawn Seals, the U.S. History teacher here at Central. “Students often believe they cannot have an impact since they do not vote; however, they do have a lot of influence based on the fact that they are future voters and they can already be doing things to change the minds of people in power.”

Since many students display indifferent attitudes about politics and their government, how do they decide who to vote for when they finally reach the voting age?

“When it comes to politics, I and a lot of others do get our political beliefs from our parents and that’s just because we’re so used to listening to their conversations about topics having to do with politics,” said Jessyca Foster, a junior student at Central.

Other students also agree that they are influenced by their parents. One senior, David Rudek, revealed how his parents encourage him to form his own opinions.

“I partially get my beliefs from my parents. My dad says that politicians aren’t trustworthy and he says that I should do my own research,” he stated.

Often students want to be involved, but they are discouraged because they can not vote yet.

“I like discussing politics,” expresses another Senior Dylan Muccino, “but I am not 18 yet so I can’t really vote in anything yet. I do want to be more involved when I am of voting age though.”

Despite not being able to vote, students can still build up knowledge about government parties and processes before reaching the voting age. It is beneficial to encourage political participation among students because when the youth is involved in the community and government they are more prepared to be leaders in their communities.

“Furthermore, students should be involved in our nation’s political process because they are our future leaders,” explained Mr. Seals. “Lowering the voting age might get students to be more involved. Some of my students have suggested lowering the voting age to 16, which is when most states entrust drivers to be responsible enough to operate a motor vehicle.”

Undoubtedly, students should want to be well-informed about the current state of their country and they should be encouraged to explore politics and form their own opinions.