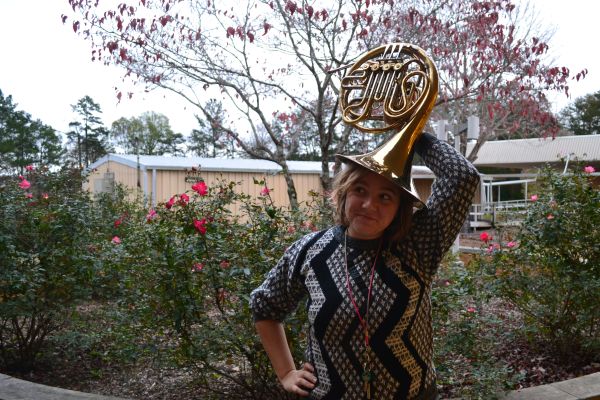 CENTRAL BAND ALUMNI CONTINUE INTO COLLEGE SYMPHONY -- Chattanooga State Symphonic Band is home to Central Alumni and hopefully many more in the future.

In Chattanooga State Community College’s cozy theater, the Symphonic Band had its very first concert. The band’s director, Nicholas Hartline, started the band just this year. The new Symphonic Band is now home to Central alumni Blake Vayda and Jake Whitaker. Both talented musicians were a part of Central’s band for their entire high school careers, and they continue to play great music under the direction of Professor Hartline.

Until this year, Chattanooga State did not have a large ensemble like the Symphonic Band.

“The inspiration for creating the Symphonic Band came from the need to offer our instrumental music majors more ensemble opportunities,” explained Hartline.

Previously, music majors were limited to smaller ensembles and were unable to get the experience one might have at a larger university.

“We felt this void needed to be filled in order to fully prepare our music majors under the Associate of Fine Arts (AFA) degree,” noted Hartline, showing that he deeply cares about the quality of education his students receive.

Like many of his students, Hartline participated in band while in high school.

His band played extremely difficult music, but not much else.

“In a sense, we were made to believe that we were too good for easier music,” he confessed. “What I have learned since those days is that ‘good music’ is good music, regardless of the difficulty.”

Hartline’s hard work and the band’s dedication paid off in the November 10 performance. With beautiful selections including Hebrides Suite and Arabian Dances, the Symphonic Band deeply impressed the audience. Vayda’s moving solo in the Hebrides Suite and Whitaker’s mastery of complicated rhythms in Arabian Dances show how Central’s music department has provided students with a strong foundation for music. Under the direction of Hartline, they have definitely grown as musicians.

“Considering the fact that this is the first time the school has had a large ensemble like this, how Professor Hartline was able to get a group together with equipment and music is nothing short of amazing,” affirmed Vayda.

Chattanooga State’s Symphonic Band has great potential. With a dedicated director like Hartline, the Symphonic Band will continue to grow. For Central students considering participating in college band, Chatt State has much to offer.