But Seriously: ‘Pokemon Go’ is The Best Game Ever 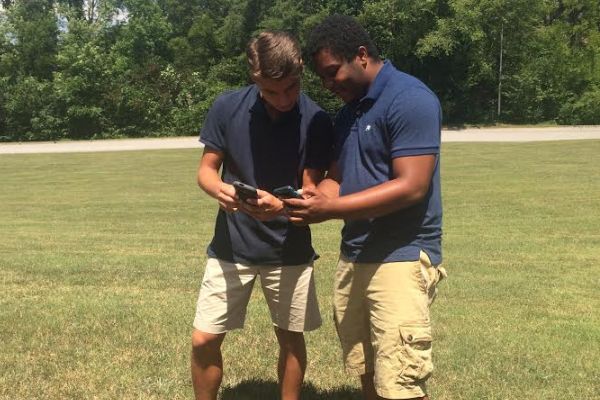 POKEMON GO IS A SUCCESS -- Students at Central High School gather to catch'em all!

On July 6, 2016, the gaming industry had been changed forever. The highly anticipated mobile game “Pokemon Go” was released in North America, New Zealand, and Australia and became one of the most downloaded games ever.

I sat down with some students to understand the excitement of the game.

“It’s seriously the best game ever”, says Senior Rueben Thrasher, “This game is so different and really anyone can play it”.

Rueben is right, anyone can play it and just about everyone is. An estimated 7.5 million downloads in the United States alone proves that. Age is also not a factor. Players range from young children age 6 to adults in their thirties.

Now that summer is over and school is starting, I wondered if students would be distracted by the game.

Mr. Parsons stated, “I’ve seen no problem with the game in school because it is a very active game that requires you to walk around and look for the Pokemon”. He said he feels that if the school was a Pokestop, which is a hub or particular area where Pokemon are more likely to be found, then it could be a distraction. “The company has not made any schools that I know of  Pokestops so I think they are on our side”.

But let’s be serious for a moment, is this a safe and fun game?

In my opinion, absolutely. I took my younger brother to Coolidge Park this summer to play the game. Coolidge Park is one of the top areas in Chattanooga to catch Pokemon. We had an absolute blast! Random people came up to us and told us where to look and tips on how to play. They were super nice and it seemed so easy to talk to anyone because we all had one goal in common, finding all the Pokemon.

Have there been some horrible stories of people trespassing or some other awful event happening while people are playing? Yes. And there always will be. There will always be flaws and problems. That’s life. We just have to choose to look at the bright side.