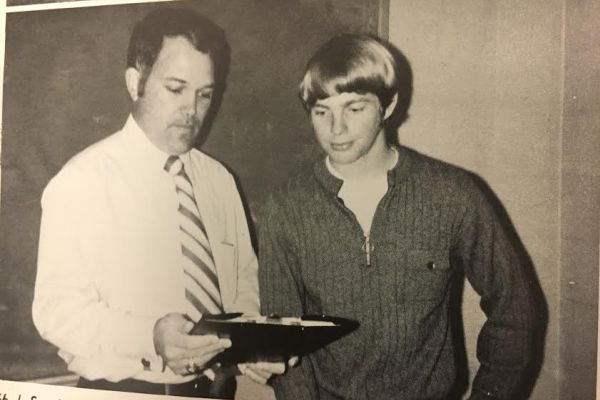 ARNOLD RECIEVES AWARD FOR TRACK -- Track superstar Steve Arnold runs his way into the Hall of Fame in 2016.

Track superstar and Central High Alumni Steve Arnold not only graduated from Central in 1972, but was also nominated into Central’s Sports Hall of Fame earlier this school year for his success in track. Arnold was not only involved in track, but also was very involved in many organizations at school and is grateful to call Central his alma mater.

“Being from a family of purple pounders, my mother and sister being crowned Mrs. Central, I pushed myself to do well in many sports including football, basketball, and track.” shared Arnold.

He was also on the Mr. Central court, a member of the Key Club (similar to a volunteer club), and was the Sports Editor of the Champion and Digest.

However, the most notable accomplishment of Arnold was his career in track.

“During my track season I set Central’s records for 100 and 200 yard dashes and long jump, as well as the school records for 440 and 880 yard dashes, both of which I still hold today.” commented Arnold.

In addition to holding those records, he received All Hill, All City, All County, and All Region during his track career at Central High School.

After graduating from Central in 1972, Arnold received a scholarship at Tennessee Tech, where he was All-Conference both indoor (60- yard dash school record holder 6.1 seconds) and outdoor (100 yard dash, 440 yard relay and mile relay).

“I even raced Ivory Crocket on the day that he set the World Record in the 100 yard dash at the Tom Black Track in Knoxville, Tennessee.” said Arnold.

He graduated from Tennessee Tech with his Bachelor Degree in English-Journalism and is now the father and newly-named grandfather of two. Arnold is also the General Manager and Director of Sales and Marketing of Anastasia Confections, a subsidiary of BBX Sweet Holdings in Fort Lauderdale Beach, Florida.