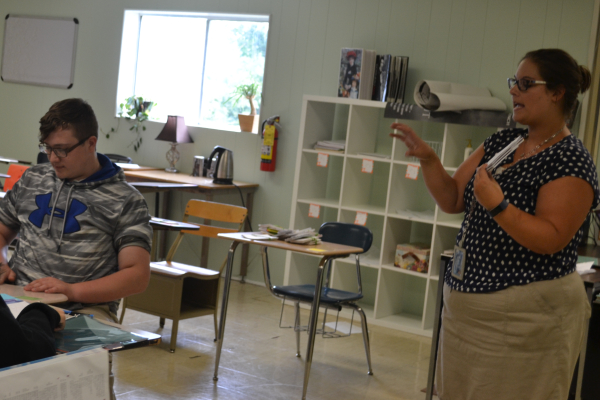 In 2002, Wilson graduated from Cleveland High School. After three years, she went on to receive a double major in French and English at Lee University.

“I always say French chose me because when I went to college, I had no intention of being a teacher or studying French,” Wilson divulged, “I went on a study abroad trip in 2002 to Normandy after taking two semesters of dual-enrollment French. It felt like magic when I spoke to French people in their own language and they understood me. After that summer in Normandy, I knew I wanted to teach students how to have the same experience.”

Wilson has teaching experience with younger and older students alike. She started off her education career by teaching French to adept fifth graders as an extracurricular elective. In 2006, however, she began her full time job as a high school French instructor.

“[During] my first year of teaching, I taught reading remediation and French,” Wilson recalled. “Since then, I have taught mostly French and some English. My favorite class I ever taught was French Cinema.”

Wilson enrolled in graduate school at the University of Virginia from 2009 to 2011, having taught for a few years.

French is the one of the only languages that is taught in every country, alongside English. Additionally,  French is an official language of several international organizations, with France being the most visited country in the world. France has a very rich culture, so those that have the opportunity to learn the language will be able to appreciate their scientific, literary, and fashion advancements with a deeper understanding.

“I like to teach in several different ways – getting students out of their seats, molding Play-Doh, drawing comic strips, watching film clips, putting on skits, and more. The more ways I teach something, the likelier students are to understand and enjoy it,” Wilson explained.

The new course was announced over the summer, sparking anticipation among many students that were interested in the romance language.

“Mrs. Wilson is different. She’s hand-on, and doesn’t sit and talk all the time like most other classes are taught,” commented Sophomore Jermaine Maddox.

“She’s really funny, kind, and sweet,” added Sophomore Tyreke Studdard, “She’s the best French teacher I could ever have.”

The interactive aspect of Wilson’s class is what makes her students enjoy learning French even more. Her students may be surprised to learn that she proposed to her husband, rather than the other way around.

“I love [Central]!” Wilson divulged. “I have felt so supported by the other teachers, I have laughed every day with my students, I have been having a blast. I’m always happy on my drive to work.”

Mastering another language comes with a lot of benefits, but that doesn’t necessarily mean that it will be easy. It takes time and effort to memorize grammar rules and conjugation on top of absorbing an entirely different vocabulary.

“Regardless of whether I’m teaching them French or English, I want my students to know I believe in them. I have a little four-sentence speech that I tell them every single day, hoping that at some point they will start to believe in themselves as well – or at least believe that I do,” Wilson concluded.