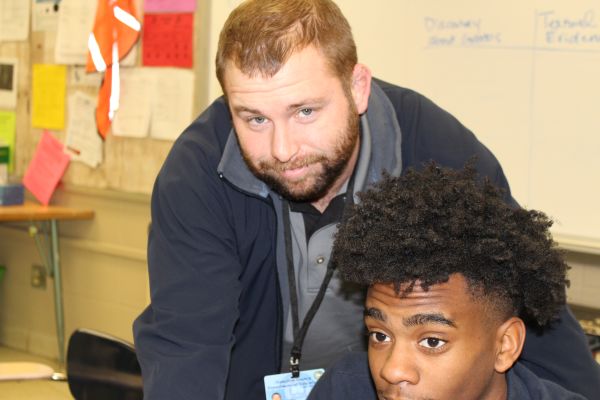 MR WINESBURGH HELPS A HARD-WORKING STUDENT -- Ulric Winesburgh helps one of his students while working on the computer.

This semester, a brand new teacher has arrived at Central High School. Ulrich Winesburgh is the new Edgenuity teacher, assisting students who are taking online courses. He is eager and excited to begin teaching at Central.

Winesburgh, who previously taught at Hixson High School last semester, is now at Central to help students learn, as well as do their best. He is in his third year of teaching and has taught at schools, such as Soddy Daisy Middle School and East Lake Academy.

Winesburgh attended Central High School from 2003 to 2004 and then transferred to Soddy Daisy High School for his remaining three years. After high school, he graduated from the University of Tennessee at Chattanooga (UTC) with a bachelor’s degree in health and physical education. He is currently in his last semester at Western Governors University for his master’s degree in special education.

“I enjoy the relationships I build with my students and having the summers off is a great bonus too,” claimed Winesburgh.

Like many, Winesburgh enjoys spending time with his family. He has a wife and three children named Smith, Brynlie, and Kalel. His wife shares the same ambition of helping children learn, as she is also a teacher. His three children attend Hixson Elementary, which is where his wife teaches.

Winesburgh encourages all students to try and perform their best no matter what. He also hopes to get to know Central and all of its students, as well as its faculty.

As for advice to the students, Winesburgh said, “Just remember in life that tough times don’t last, but tough people do!”