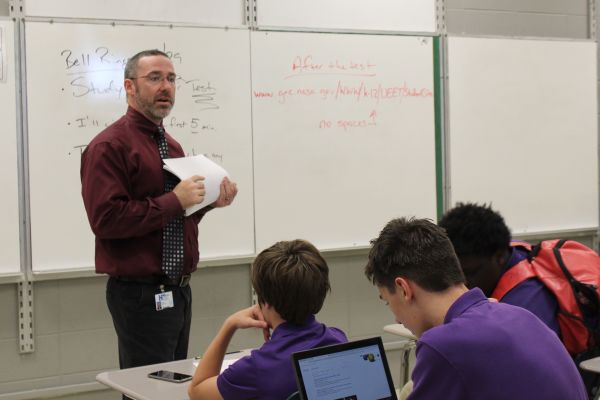 Each year, Central’s staff grows with qualified professionals to continue its legacy. The school has welcomed John Brittingham as their latest physical world concepts instructor.

Brittingham graduated college from the University of Tennessee at Martin with a Bachelor of Science in secondary education, concentrating in biology.

Brittingham has been teaching for five years, however moved to the Chattanooga area this summer due to his marriage. He has been looking forward to beginning a new chapter of his teaching career here at Central.

Brittingham made the decision to become a teacher because of the powerful effect his very own teachers had on him growing up. It is his goal to provide the same support for his students.

“I became a teacher so that I could positively impact the lives of others the way that teachers in my life have impacted mine,” Brittingham shared.

So far, Brittingham has liked the school as well as the people in it, for it reminds him of the school he taught at before he moved to Chattanooga. He said that Central was welcoming and that he was comfortable teaching here.

“I got a good vibe from the administration and students at Central. I very much enjoyed my previous school, and Central reminds me of it in many ways,” Brittingham stated.

Another Freshman, Kaylee Stratton, also enjoys being in Brittingham’s class.

“He’s pretty cool, and I feel as if he’s a very good teacher. He has impacted me by being so great at his job,” Stratton stated.

Brittingham is a great addition to the Central faculty. Hopefully, he will be a great influence on Central students for years to come.