The Gray Area: A Crazy Election for an Even Crazier Year 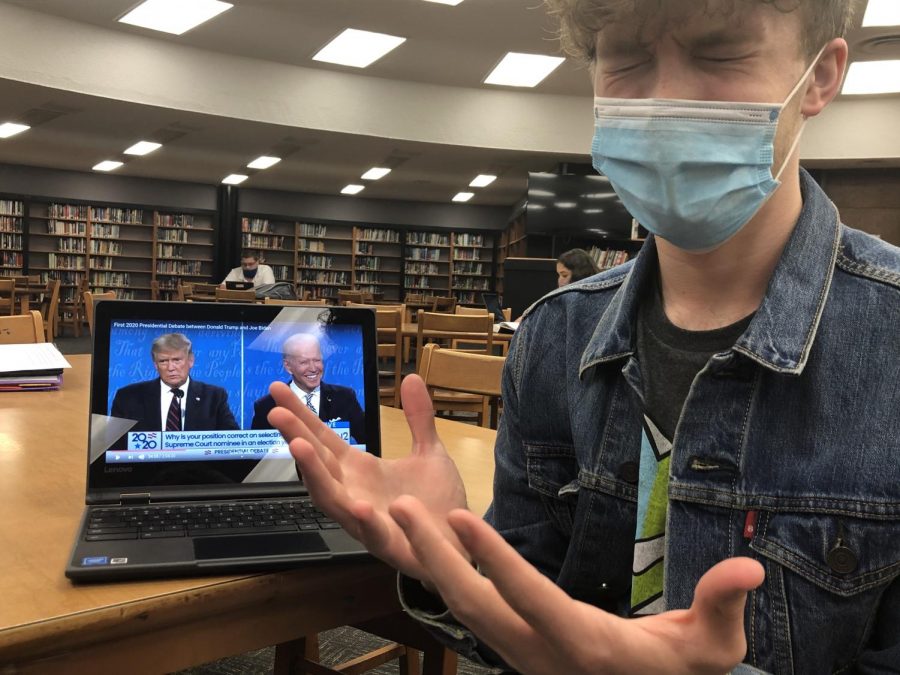 THE GRAY AREA: A CRAZY ELECTION FOR AN EVEN CRAZIER YEAR -- Senior Columnist Grayson Catlett turning away from watching the presidential debate of September 29, 2020.

This year has been unhinged for multiple reasons, but one national event is throwing things into even more chaos: the presidential election. Day in and day out, the news is now swarmed with one election story, poll, or advertisement after the next. At the time of publication, many people across the States have already witnessed the first debate between incumbent President Donald Trump and Democratic candidate and former Vice President Joe Biden. To most people, it seems like the most controversial presidential election in recent memory.

“In some ways our political process has gotten more divided as the year has progressed,” said U.S. History Teacher Shawn Seals. “COVID[-19], a presidential election, natural disasters, and the death of Justice [Ruth Bader] Ginsburg have all added to the contention.”

However, this year presents an additionally troubling scenario in the wake of the COVID-19 pandemic. With mail-in voting becoming more practical, many are gearing up for a messy and confusing night on November 3. Swing states may need extended time for results, and both candidates are already suspecting election fraud to the tune of near-universal acclaim in their respective parties.

“There will be a great deal of confusion, and we will not have the results of the election immediately, as we usually do,” stated U.S. History Teacher James Massengale.

For incoming spectators, it seems very difficult to become involved as the animosity and uncertainty continue to elevate. With all that said, I want this piece to serve as a compass on what Tennessee is asking for its voters, as well as a down-the-middle summary of the most anticipated day of the year.

One notable factor that is aiding the disarray of the voting process is the apparent unity of almost everyone, from celebrities and corporations to average people, to get others to register and educate themselves on the upcoming candidates in the federal, state, and local elections. Major social media platforms have even added noticeable sections to their interface that allow quick access to voter registration.

Seals elaborated on this phenomenon: “I have noticed the recent push to get voters to turn out to the polls on election day (or to vote early). Voting is a good thing; everyone that’s eligible to vote should be encouraged to vote.  Voting should be an easy process that is not restricted for any group of people.”

These efforts have mostly been made to increase the usually low voter turnout in presidential elections. According to the United States Census Bureau, only 61.4 percent of the eligible population in the country came out to vote in 2016, a statistically normal yet functionally unsettling number.

“Compared to the rest of the world, the U.S. always has terrible voter turnout, which is sad,” Massengale noted. “The most important thing that an American citizen has is his or her vote, but historically, we are not great about using that vote.”

The only way to improve these dismal numbers is, obviously, to vote. For those reading who are looking to sign up in Tennessee, be quick! The state’s registration deadline is October 5. This year’s seniors can still successfully register as long as their birthday comes before November 3, 2002. The Tennessee voting application starts here. Previously registered voters can double-check their voter status here.

Seals voiced his wishes for eligible students to register. “Go to your local election commission’s website and make sure you are registered, look at sample ballots so you are familiar with the ballot and everyone running, and be sure you are aware of your voting location. Also, vote early, if possible. Election day lines can be long, but standing in a line to vote may be part of the fun and nostalgia if it’s your first time voting. I feel proud when I vote, and voting with your fellow citizens feels special, too. Take some friends and/or family with you to vote – it makes the process more fun.”