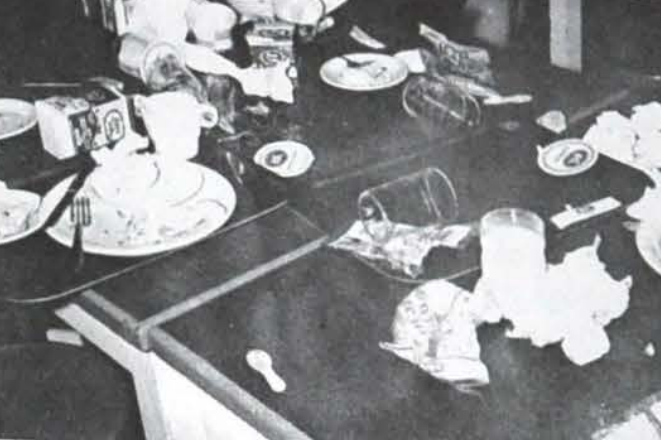 TIME TO TIDY UP — The Student Council took pictures of areas that needed to be cleaned up with the plan of showcasing the same areas after the clean-up effort.

The Junior Achievement (J.A.) program came to Central to organize students in the Chattanooga area into small businesses that were run completely independently. Their motto “Learn by Doing” included introducing the American business system to young people all over the country. At the end of the year, these student run businesses have their debts paid off and profits divided. In the previou year, there were 18 J.A. companies in the Chattanooga area with over 200 participants. For the 1961-1962 school year, J.A. planned to have 34 companies with as many participants as possible. One Central student, Steve Tingle, was involved in J.A. in the previous school year. He was the president of Wontsum Printing Company and was elected President of the Year for Chattanooga and was runner-up for the award statewide. He was also named the best salesman in the city and fifth overall in the South. J.A. provided great opportunities to students like Tingle, who could catch a glimpse of what their future might hold.

Two Enter Central From Cuban Base

Central brings in new students every year: freshmen, transfers, those who have moved, and many more. However, in 1961, Central welcomed two students from a unique background. Then Senior Sidney and Junior Phyllis Patchett entered the halls of Central after spending two years at the United States’ Naval Base in Guantanamo, Cuba; their father, a naval commander, had been stationed at the base. Despite being on foreign land, the Patchetts attended an American school, where they learned both English and Spanish. Both girls were active in their previous school; Sidney Patchett was vice president of the Student Council, on the yearbook staff, and was voted “Wittiest,” and Phyllis Patchett was treasurer of the Student Council, also on the yearbook staff, volunteered in the school’s library, a chairman of the property committee for the junior-senior play, and was voted “Best Dancer.” The Patchetts enjoyed living outside of the U.S. but were excited to see what their new home and school would offer them.

On November 30, 1961, Dr. Henry J. Derthick visited Central to speak to senior English classes. Dr. Derthick was the president emeritus of Milligan College and a member of Facing Forward, which focused on inspiring high school seniors. Seniors listened intently as Dr. Derthick discussed experiences in his life and 72 year long educational career. The theme of Derthick’s message was “Making Life Adjustments or Getting Along with Everyone with Whom You May Come Into Contact.” Derthick emphasized love in his message, and he was truly an inspiration to the class of 1962.

Before the school year’s winter break, Central received its very own radio station, WPAG (Wonderful Purple and Gold), with the purpose of informing students of school activities. WPAG first came into operation on the morning of January 2. The Student Council, the main sponsors for the station, spent their winter break preparing WPAG for the airwaves. At the time of publishing, the students in charge of WPAG were looking to add an intercom system to Central that would allow them to broadcast to the entire school. The Student Council Broadcasters Association, who was in charge of WPAG, consisted of 11 students: President Bill Carter, Vice President Stanley Sells, Skip Clemons, Bill Harless, George White, Ronnie Tucker, Johnny Slaten, Wanda Martin, Jeannie McCoy, and Diane Morrison.

“If You Don’t Care For Central Who Does?”

Towards the end of the 1961-1962 school year, the Student Council pushed forward a cleaning campaign focused on improving the appearance of Central’s campus, which at that time was located on Dodds Avenue. Four areas were highlighted as needing the most effort from both the student body and faculty to clean up: the washrooms, cafeteria, hallways, and campus. The Student Council took several pictures of “dirty” areas like the one at the top of this article and posted them alongside pictures of the same area that had been tidied up, creating a before-and-after effect of the clean-up effort. The Council started this action because they saw the state of Central’s appearance and felt that visitors could not gain a favorable impression while there.

Many aspects of Central High School’s history, including past physical copies of the Central Digest can be found at the Preservation of Chattanooga Central website.