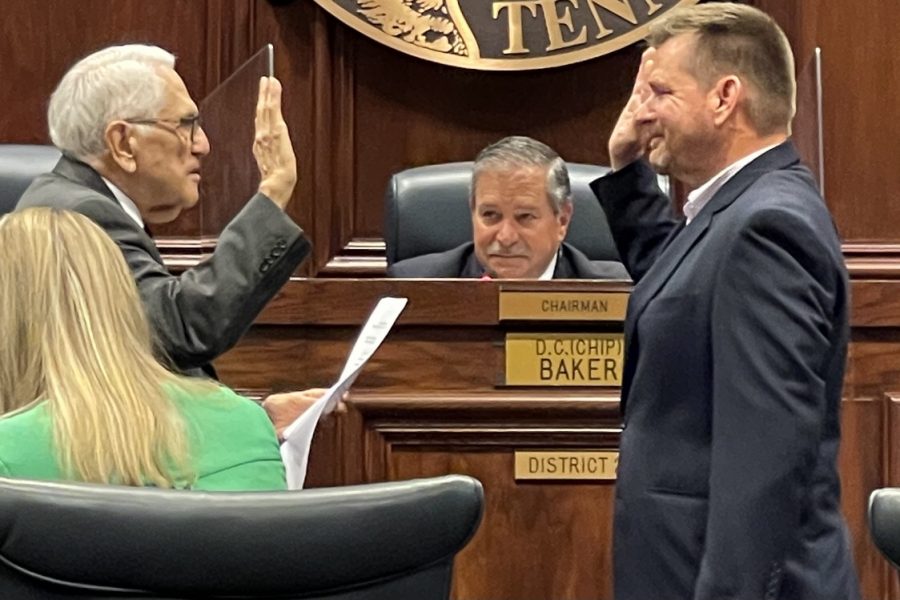 donated to the Digest

JAMES WALKER IS HAMILTON COUNTY'S NEWEST SCHOOL BOARD MEMBER -- James Walker is sworn in as the newest member of the Hamilton County School Board.

Hamilton County has a school board that overflows with people who want nothing but the best for the students that attend Hamilton County Schools. Former Chattanooga Central graduate, James Walker, dives into the position as the new District 9 representative for the HCDE school board on August 11 of this year.

James graduated in 1984 and has always been involved in the community at Central and the entire Harrison area general.  He was, in fact, deemed “The Mayor of Harrison” by many people in the community.

Some of  Walker’s duties as a member of the school board include representing District 9 in hiring and directing the superintendent, approving how funds are received are spent, and setting policies for the schools.

Steve Highlander, who now serves on the county commission, formerly served as the District 9 representative to the school board. He is currently representing District 9 in the allocating of funds for the school system and other departments in the county government.  Highlander was involved with choosing Walker to take his previous position.

“He and eight others submitted resumes and participated in a forum I set up. They took turns answering questions submitted from commissioners and district residents. James answered all the questions well which helped him be appointed,” Steve Highlander stated.

Both Walker and Highlander will need to campaign for re-election at the beginning of 2022 for their respective positions if they wish to continue serving in the same capacity.  Steve hopes to continue as County Commissioner, and he would love to have CHS students work on his campaign.