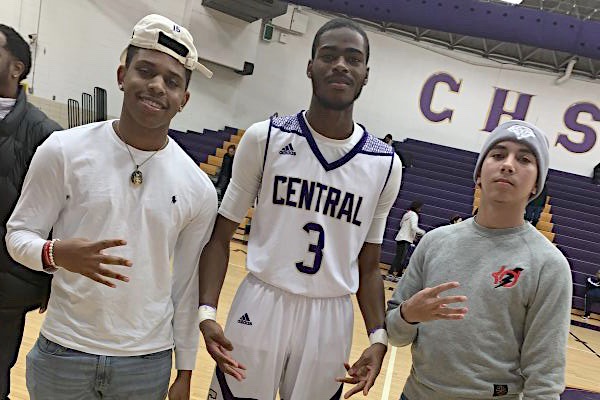 As their final year of grade school approaches its end, the 2018-2019 seniors of the basketball and cheerleading teams are beginning to plan for their lives after high school. Following a huge win for the boys basketball team, many of the seniors were acknowledged for what they have accomplished in their four years at Central and what they plan to do with their future at Senior Night.

Senior Aly Brazier has been a member of the cheerleading squad for all four years her high school career and was co-captain her junior year. Brazier volunteered at the annual Central Golf Tournaments, the Buddy Walk, the Class of 88′ Reunion, and the Toys for Tots Christmas Toy Drive. She is a member of Young Life and FCCLA, and plans to attend Chattanooga State to become a dental hygienist.

Senior cheerleader Cassidy Dummer received the academic award for the past three years. She is a member of the National Beta Club and the 21 Club. She has been a member of the cheerleading squad for four years, earning the title of co-captain her junior year and becoming captain her senior year. Dummer has volunteered at the annual Central Golf Tournaments, the Buddy Walk, the Alumni Barbeque, and the Class of 88′ Reunion. Her hobbies include attending Young Life. She plans to attend the University of Wisconsin-Green Bay to major in economics.

Senior Samantha Reels has been cheerleaderleading at Central for three years, and she received an Academic Excellence Award. This year, she is serving as Skills USA President and Senior Class Vice President. Reels has volunteered at Prospect Elementary School in Mrs. Rollins’ Kindergarten class, the Buddy Walk, the annual Central Golf Tournaments, the Feed My Starving Children Organization, and the Class of 88′ Reunion. She plans to attend the University of Tennessee at Knoxville to receive her bachelor’s degree in orthodontic dentistry.

Senior Maggie Watts has been a member of the cheerleading squad for four consecutive years, serving as co-captain her junior year and captain her senior year. Watts has spent her free time volunteering at the Buddy Walk, Class of 88′ reunion, McKamey Animal Shelter, Memorial Hixson Hospital, Happy Nest Wildlife Rehabilitation Center, and the annual Central Golf Tournament. She plans to attend Chattanooga State to earn her associate degree in nursing and later transfer to Lee University to earn her bachelor’s degree and pursue a career as a nurse anesthetist.

Senior JerMichael Walker has played basketball for the last four years. He is a member of the Young Life program. After graduation, he aspires to play basketball at Chattanooga State while earning his associate degree.

Senior basketball player Davon Reid has played varsity basketball for the past four years and was a member of the football team during his senior year. He plays AAU basketball for the Chattanooga Elite. After graduation, he aspires to play basketball at Cleveland State University and earn an associate degree in business marketing.

Senior Marquis Robinson has been a member of the basketball team for three years. He is a member of the Beta Club, and an honor roll recipient. After graduation, Robinson plans to attend MTSU to major in buiness management.

Wyatt Garrett, who is also a senior, has been a member of the basketball team for two years. He played football for four years and earned the Etter Farmer Award during his junior year. Garrett was a member of the track team for two years, participating in shotput and discus. During the summer, he volunteered with the Little Pounders Football Camp. After graduation, Garrett plans to attend a junior college, transfer to a Division I college to play football, and major in engineering with a minor in culinary arts.

As the seniors look forward to new beginnings, they still take time to look back on memories that they made at Central.

“One of my favorite things that happened while at Central was getting to cheer at Friday Night Lights, and watching our community come together to support us,”  revealed Brazier.

“[My advice] for the upcoming seniors [is to] do your school work and participate in as many high school activities as you can so that you don’t regret it after high school,” recommended Brazier.

“Actually try on your ACT and don’t skip it because catching up is horrible,” explained Watts. “If you want to do something than try it because its better than wondering what it would have been like to do it,” Watts concluded.