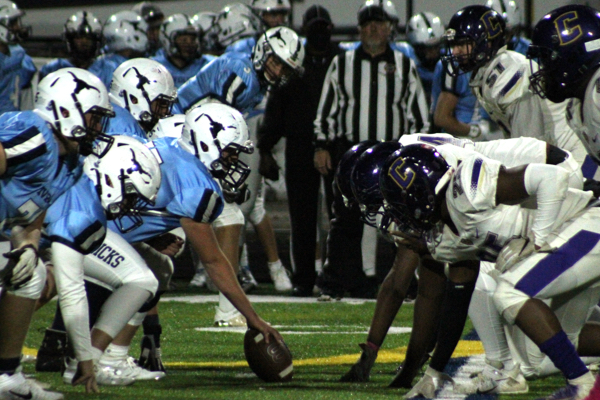 CENTRAL FOOTBALL LOSES TO ANDERSON COUNTY IN WEEK EIGHT OF FRIDAY NIGHT LIGHTS -- The Pounders set up on the line of scrimmage to defend the end-zone.

On Friday, October 16, the Central Pounders played against the Anderson County Mavericks on their home field. This was a big night for the Pounders, being one of the toughest games of the season. Anderson County went into the game undefeated in the district. With only winning one game this season and coming off of a loss, the team became discouraged. Coming into the game, the Pounders lacked the confidence that had been given in previous games. However, the Pounders would continue to push forward.

“Anderson County has been an elite program for many season, games like this against a program like Anderson County will expose you and your young kids in a hurry. I was proud of the overall effort displayed from our boys,” stated Head Coach Curt Jones.

The Mavericks would receive the ball going into the second half. Anderson County had a hard drive downfield, but thy scored in the end. This would made the score 0-47. The Pounders started to gain momentum, but they were also growing tired. The Pounders gained a first down, but would push no further on their drive. The Mavericks gained possession again. Anderson County ended the quarter with a long pass downfield.

Anderson County continued to drive down the field, carrying the torch from the third quarter. Another score from the Mavericks made the score 0-53. The Pounders pushed hard on their next drive downfield. Junior Michael Watson made a big run downfield; unfortunately, it was called back. Junior Noah Collins turned around and made another long run downfield, continuing the momentum from Watson. After those two plays, the Pounders could not pull through, resulting in another punt. Neither team would score for the rest of the game. Anderson County defeated the Central Pounders, 0-53.

Offensive lineman Demetrio Dominguez stated, “We can improve by having leaders within the team that will start to stand up and take responsibility going forward.”

In week nine of Central football, the Pounders will face the Hixson Wildcats. This is an away game on Friday, October 23, at 7:30. Those hoping to attend must buy tickets online; no tickets will be sold at the gate. Tickets for the game can be found on gofan.com. Come out and support your Purple Pounders.