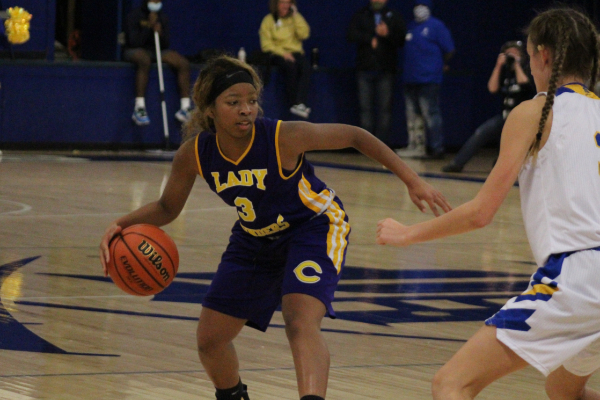 The Lady Pounders have been preparing for the season since this summer. Although, the team could not get in all of their preparation as COVID-19 prevented them from participating in scrimmage games. The Lady Pounders would have to wait until their season opener to experience playing together for the first time. The first game for Central was played on Friday, November 30, against Boyd Buchanan.

The Lady Pounders were feeling nervous heading into the start of the season, and this was a potential factor in limiting the team’s potential. However, the team played their best, even with the nerves of the game. The Lady Pounders’ first outing ended in a loss against Boyd Buchanan; the final score was 11-53. Despite the heavy loss, the team was able to create positive out of the game, such as improving upon mistakes.

“[In] the first game, the team was nervous and didn’t really compete. One of our biggest issues is turnovers and making the smartest choice every play. We g[a]ve the other team too many opportunities at chances to score by our turnovers,” shared Coach Sandrea Sylman.

The loss against Boyd only pushed the Lady Pounders to excel in their next game against Hixson. In the time between the games, the team started to focus on defensive rotations, pressure, and turnovers. The loss allowed the Pounders to relieve the trapped of nerves of the season.

“For me, [during] the first game I was really nervous because it was my first time being on court in a few years. It was a very challenging game, but no matter what, we pushed through it and never gave up,” stated Sophomore Cadence Williams.

On Tuesday, December 1, the team traveled to Hixson High School to play against the Wildcats. The Lady Pounders were ready to show their growth. The team’s growth became very apparent as the game progressed. However, these improvements could not produce a win for the Lady Pounders. Central’s second game of the season also ended in a loss; the final score was 29-43.

“[In] our second game the team brought intensity and competed from beginning to end. I am proud, regardless of our current record. The girls have come together to represent the school to the highest standard,” shared Coach Sylman.

The team continues to work hard and grow each game. The Lady Pounders are learning more with each practice and improving upon their weaknesses, and they have not let love for the game diminish.

“The Hixson game went well; there is some stuff we can work on to become better, but overall it went well,” stated Cadence Williams.

Due to potential exposure to COVID-19, Central’s team is currently quarantined. They will be able to resume the season on December 12. Rescheduling for the games against Red Bank, Lookout Valley, Ooltewah, and Howard is currently in progress. The Central Digest will update readers on the updated time frame for these games when the information is released.