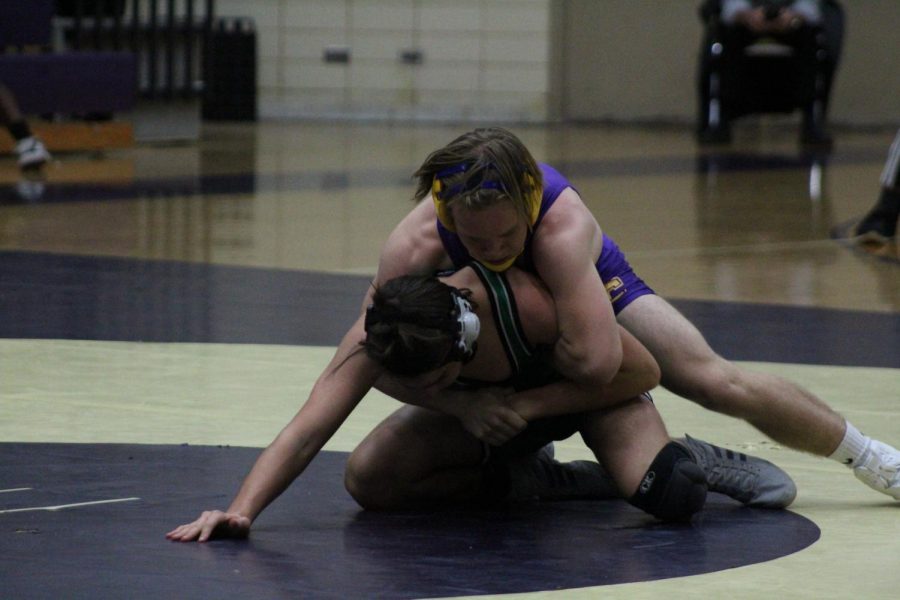 A WRESTLING UPDATE -- Senior Roby Thomas attempts to pin his opponent to the ground.

The COVID-19 global pandemic has affected nearly every aspect of daily life for almost a year now. While many people have adjusted to try to normalize the way people do things, others are still having to adapt to the new challenges that come with the coronavirus. Many high contact sports, such as wrestling, have had to take extra precautions, rescheduled seasons, or in some cases, cancelled seasons.

Throughout Central, wrestlers and coaches alike feel the same desire for a continued season, no matter how it is conducted. Although this years’ wrestling team is not as big as previous teams, they still hold themselves to the same standards as they would if this was a regular season.

“By losing the Invitational, we also lost our biggest fundraiser of the year, which hurt, but flexibility is the name of the game and all we can do is adapt and look ahead,” stated Coach James Massengale.

This challenging season has tested everyone involved in the sport, but with change comes the ability to adapt to face these new challenges, and that is exactly what the Pounders did.

“Flexibility is still the name of the game,” added Massengale. He continued by saying, “we just do our best to ensure that we get competition wherever it can be found.”

Wrestlers have arguably been affected the most by these unusual changes. With tournaments being cancelled and spectators being limited, it is becoming harder and harder for wrestlers to show off their talents. Seniors have been challenged the most; due to less people at meets, they have to work even harder in hopes that they can continue doing what they love.

One positive that remains during this season is the continuation of dual meets, which is when one school faces off against another school. This allows for Central to continue wrestling even with a smaller team.

Two wrestlers in particular, Roby Thomas (8-1) and Randall Gray (7-0), have been praised by coaches and teammates for their efforts during this tough season.

Coach Ryan Mallory commented on their efforts, “If they had an opportunity to wrestle in tournaments, I’m sure they would have won at least a few medals each.”

Coach Mallory has always praised his wrestlers, and this year was no different.

“The wrestlers have handled this season well. The wrestlers have followed the county’s guidelines regarding mask-wearing and social distancing, and they have managed to stay healthy amid the spreading illness,” stated Coach Mallory. He finished his statement by saying, “I think their spirits are good. They keep showing up to practice and are giving great effort. I’m sure they only wish they could wrestle more.”

With the COVID-19 vaccine rolling out soon, we can only hope that life can continue back to the normal that was pre-quarantine. The vaccine also brings hope to other young sports players, students, and teachers that are doing all that they can to continue their daily life amid a raging pandemic.