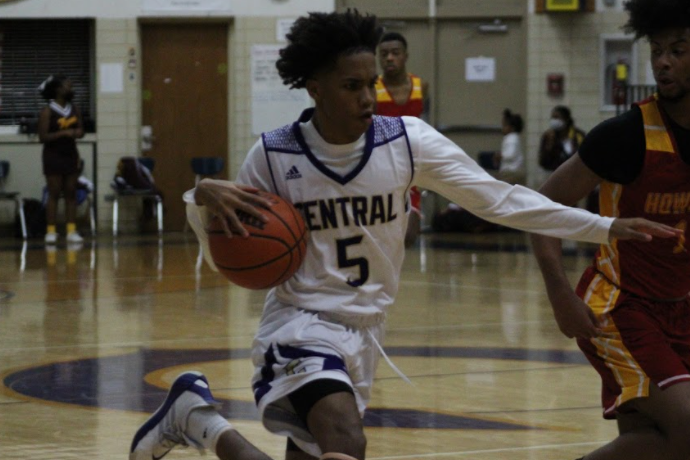 Entering the final stretch of the regular season, the Pounders looked to finish strong ahead of the district tournament.

Central started this final stretch against the Howard School. The team worked really hard over the course of the game but fell short; the final score was 45-70.

The Pounders continued their efforts in the following week. On Monday, February 8, Central faced off against Signal Mountain High School. The team left all they had on the court, pushing hard to win. In the end, the Pounders reigned victorious over the Eagles, 48-41.

Coming off a huge win, Central played against Brainerd High School. The team fought hard throughout the contest and came out on top, winning 53-43.

After finishing up the regular season on February 12, the Pounders prepared for their district tournament run. The Pounders finished their season with a record of  seven wins and 11 losses, earning them a first round match-up against the struggling East Ridge Pioneers.

On Tuesday, February 16, the Pounders hosted to the Pioneers. The game started off with a plethora of missed free throws by East Ridge; Central grabbed an early lead, 12-10. Even though the Pounders were ahead, they knew they could improve.

In the first minutes of the second quarter, Senior Jaylin Teague dominated on both sides of the ball. In less than a minute, Teague had scored six points from three easy layups which showcased his excellent defense and quick breakaway speed.

After Teague’s remarkable sixty seconds of basketball, the crowd was back in the game, and Central’s offense was back playing as a unit. At the end of the first half, Central was on top by a staggering score of 39-20.

After the intermission, the purple and gold returned to the hardwood and showed up East Ridge’s defense. The Pounders put up 22 points in the third quarter, compared to East Ridge’s 12 points. Central’s offense fell dormant in the beginning of the fourth quarter, but after a quick scolding from Coach Kantonio Davis, the Pounders got back on track and put up 18 points.

“I want them to be proud of every game and every practice, going out and giving everything you got for 32 minutes both mentally and physically,” Coach Davis told the Chattanoogan.

When the dust settled, the Pounders bested the East Ridge Pioneers, 79-43. Jaylin Teague was the Pounder’s leading scorer with 14 points. Seniors Donovin Taylor and Jailon Jackson followed close behind with 13 points apiece.

After the big first round playoff win, the Pounders moved on to battle the Brainerd Panthers with a region playoff berth on the line. The Pounders and Panthers both claimed a victory apiece during the regular season.

The Pounders came out of the gate slow, and Brainerd capitalized. In the first quarter, the Panthers put up 22 points while the Pounders could only manage to score 10. The second quarter was a much closer contest as Central outscored Brainerd by a point, but the Pounders had already fallen into too deep of a deficit. At the half, the Panthers were ahead by a score of 32-21.

After the intermission, impatience set into the Pounders offensive play, and the team was forcing shots. Central went down by 16 points at one point of the half, but the Pounders never gave up; they went on an unanswered 10 point run that elapsed four minutes. However, it was not enough to pull them ahead. In the end, the Brainerd Panthers eclipsed the Pounders, 63-50.

“I wasn’t actively thinking about it being my last game…but once the game ended, the realization hit me,” Donovin Taylor shared. “I almost teared up because it’s really over for high school.”

The Pounders’ loss to Brainerd marks the conclusion of the Pounders 2020-21 campaign. Even after a regular season that did not meet the high expectations set at the beginning of the season, the Pounders were still able to put together an impressive playoff run.

The 2020-21 basketball season is in the books, but in November of next year, readers can begin to look for the 2021-22 season’s coverage. Next year, the team will look forward to big performances from upcoming Senior Tongun Gore and upcoming Juniors DJ Sanderfer, Soloman Savage, and Kyree Steward.