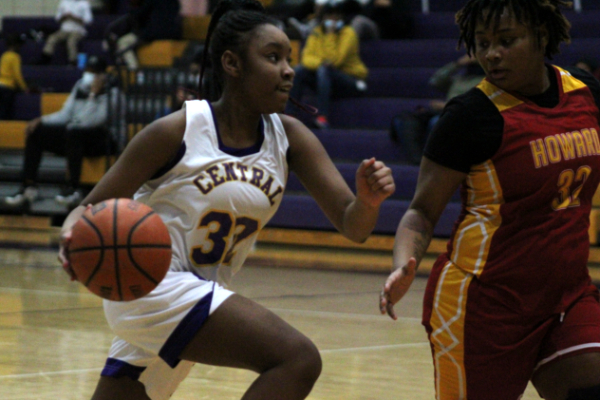 CENTRAL'S LADY POUNDERS BASKETBALL TEAM SCORES A WIN AGAINST HOWARD -- Freshman Aaliyah Walker dribbles down the court for a layup.

“This season a focus has been for everybody to get better they step on the court. That is the goal everyday for us, until we get to the skill level we need to be,” said Coach Sandrea Sylman.

On Monday, January 25, Central faced off against East Ridge. The Lady Pounders showed off their progress in a close loss; the final score was 30-34. The team was able to improve defensively and close the gap between East Ridge based off of this season’s previous match up, which ended 38-45.

Central continued with the season and played Brainerd on Tuesday, January 26. The Lady Pounders gave it all they had, but it was not enough to overcome the Lady Panthers. Central took a tough loss, 22-57.

Later in the week, on Thursday, January 28, Central played against Red Bank, working hard to obtain their first win of the season. However, the Lady Pounders would have to wait for their first victory. Both teams struggled offensively, but Red Bank came out on top. The final score was 12-27.

In Central’s next match on Tuesday, February 2, they faced off against Red Bank once again. The Lady Pounders looked to improve upon their offensive struggles, but they could not find their rhythm against the Lions. Red Bank won against the Lady Pounders back-to-back; this time, the score was 25-41.

On Thursday, February 4, Central played the Howard Tigers. The Lady Pounders looked to show all what they had to offer, and they did. They were able to utilize their season’s hard work on both sides of the court. The Lady Pounders claimed their first victory of the season against Howard, winning 37-25.

On Monday, February 8, Central went head-to-head with the Signal Mountain Eagles for the second time this season. The Lady Pounders were unable to capitalize off of the previous week’s win and could not keep up with the Eagles. Central lost 10-75.

For the final game of the season, Central went on to face the Tyner Rams on Friday, February 12. The girls played their hearts out, looking to seal the season off with another win, but the Lady Pounders were no match for the Rams. Central ended the season with another tough loss, 27-60.

Ending the season strong, Sophomore Ja’kiyah Robinson was named all district in 6-AA, stepping up setting the standard for her teammates. With no seniors present on the team, Robinson took the leadership position by the reins.

“Understanding that basketball isn’t just about winning or losing helped me a lot this past season. Noticing the growth in your team from once you started and when you ended you realize that is a big win in the end,” said Robinson

Readers can view the latest sports updates on the sports center page. This is where schedules, scores, and rosters will be posted. The Digest will continue to bring the latest coverage and updates as the 2020-2021 season progresses.