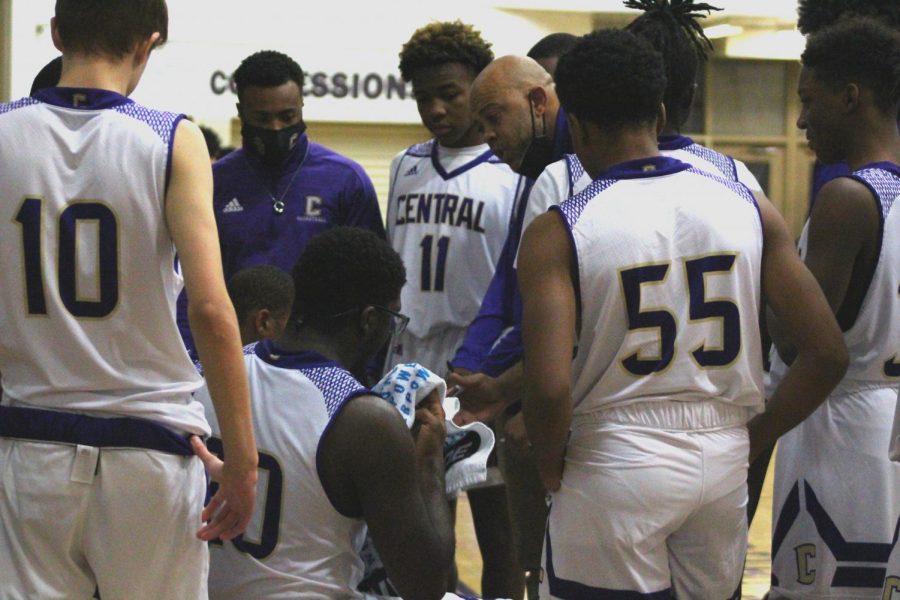 (file photo) -- Coach Kantonio Davis talks to his team during a timeout.

The 2020-21 basketball season has concluded, and with it has come acknowledgement of the Pounders’ hard work as a team. One significant honor that the team has received was given to their coach. Kantonio Davis was announced as the District 6-AA Boys’ Basketball Coach of the Year, as reported by The Chattanoogan. The award was voted on by the coaches in the District 6-AA which is composed of East Ridge, Tyner, Red Bank, SIgnal Mountain, Hixson, Brainerd, and Central.

“I was shocked, to tell the truth, and very gracious,” Davis said about his reaction to winning the award. “The award is voted on by all the coaches in the district, so I appreciate that they took notice of all the effort we gave.”

Davis joined the coaching staff at Central in 2019, a year after finishing a successful nine-year stint at St. Luke’s Episcopal School in Mobile, Alabama; during this tenure, he received multiple coaching awards and led the team to two district title games. Since joining as the boys’ basketball coach, he has become Central’s dean of students.

Members of the basketball team, including Senior Jailon Jackson, have recognized and lauded Davis for his leadership both on and off of the court.

“It amazes me how much he cares for each and every one of us. He made sure that we did things as a team… Davis is a great coach, and the students who are playing basketball in upcoming years will be in good hands,” said Jackson.

Despite the praise, Davis insisted that the award is not for him.

“It’s not about me, it’s about the team. It’s really an award for them and the work that they’ve put in,” he said.

In coming years, Davis will continue to enhance the Pounder spirit through his labor and effort with the basketball team, adding on to a resounding legacy that means more than awards.