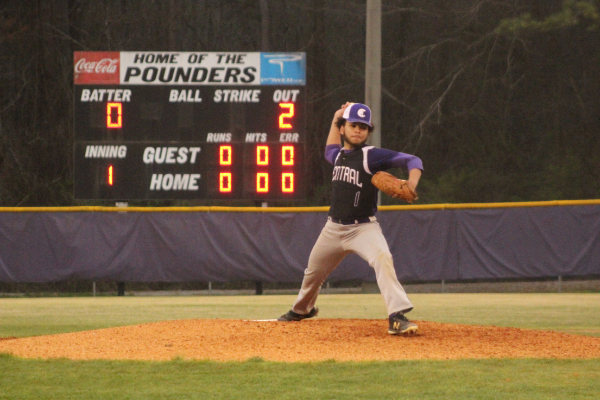 After a three game win streak, the Pounders looked to add to their momentum as they faced the district rival Tyner Rams. On top of the Pounders match-up with the Rams, they faced a four game slate over the weekend, which was part of the Central Invitational tournament.

Monday, March 29, Central hosted the Tyner Rams. To start the game, Sophomore Elijah Dill took the mound for the Pounders. Dill’s fastball command and movement of his curveball were working exceptionally well, which helped him hold the Rams scoreless. The Pounders capitalized on Tyner’s pitching struggles with several base hits which resulted in seven first inning runs. After holding the Rams to yet another scoreless inning in the top of the second, Central came back up to bat and scored five more runs. In the third inning, Dill held the Rams scoreless yet again and the offense put up three more runs. Dill finished with a complete game shutout win and seven strikeouts. The Pounders offense finished with eight hits and 15 runs scored. Great offensive and defensive performances helped the Pounders cruise to an easy 15-0 win.

The following day, the Pounders went on the road to rematch the Tyner Rams. Senior Jeremy Rogers got the start for the Pounders and he held the Rams to one run in the two innnings he pitched. The Pounders did not start out strong, only scoring two runs in the first inning, but they came back in the second inning to tally nine runs. In the top of the third inning, the Pounders tallied another o run, making the score 11-1. In the bottom of the third, Sophomore Wyatt Ford came into pitch for the Pounders. Ford only allowed two runs to score, making it 12-3. In the bottom of the fifth, the Pounders scored one more run. To finish the game, Freshman Evan Schwarzl entered to pitch and he held the Rams scoreless. When the dust settled, the Pounders had talled 13 runs on 11 hits while only giving up three runs.

“We have begun to to bond together, now playing more as a team and less as individuals,” stated Keaton Hesson.

Monday, April 12, the Pounders hosted the Howard Hustlin’ Tigers at Gene Lively Stadium. Senior Jeremy Rogers toed the rubber to begin the game for the purple and gold. Rogers completed three innings and held the Rams to two runs. . In the top of the fourth Howard went on to score three runs, while Central turned on the fire scoring 14 points in the fourth inning. The Pounders finished the game 20-5.

To finish out the week, the Pounders played the Chattanooga School for the Arts and Science Patriots at Gene Lively Stadium. Sophomore Dylan Brown started on the mound for the Pounders. In the top of the first, Brown held CSAS scoreless. Brown received run support from the offense in the home half of the first due to a Patriot fielding error that helped the Pounders bring in their first run of the game. Brown pitched another scoreless inning before being replaced by Elijah Dill in the third. The Pounders broke loose in the third inning thanks to Soloman Williams and Jailon Jackson’s singles.

“As a unit the team has become more aggressive in the box. There has been a roller coaster of games where we have both played really good games where we work hard, and sometimes not so much. At the end of the day, we have progressed becoming better and better,” stated Senior Jailon Jackson.