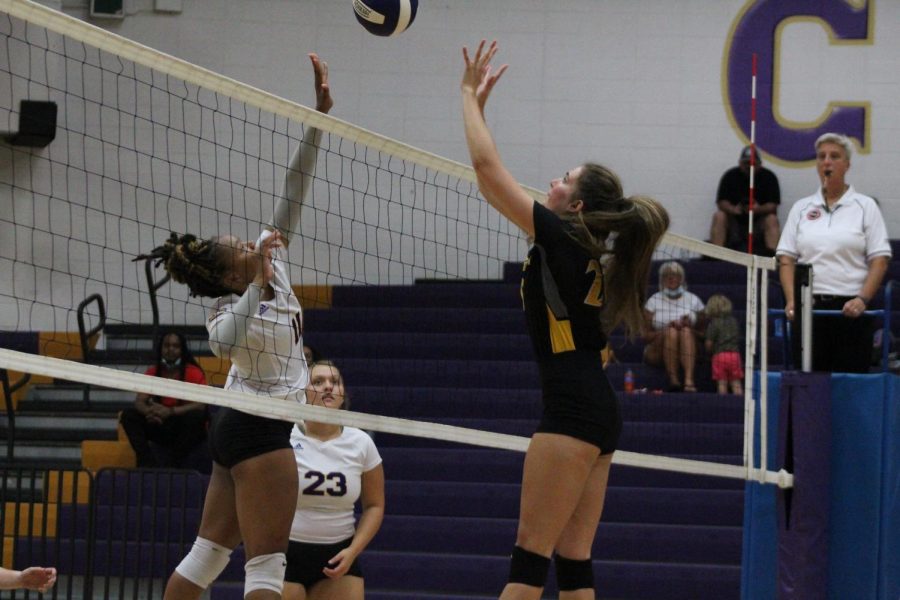 CENTRAL VOLLEYBALL TAKES A TOUGH LOSS AGAINST CSTHEA, EAST HAMILTON, AND HIXSON -- Addason Wellington spiking the ball down, earning a point for the lady pounders.

The Lady Pounders volleyball team took a tough loss on August 24 against CSTHEA. The team then played again August 26 against East Hamilton. Sadly, the team took another loss. Although the team did not come out on top, the team continues to work hard in preparation for their next games.

“The game against CSTHEA and against East Hamilton had a rough start in the first match, but the team really stepped it up the next two matches,” elaborated Assistant Coach McGrath.

The team started off the game against CSTHEA by losing the first set 25-11. The Lady Pounders continued to push through the next two sets, but lost 25-8 and 25-12. Although the team took a tough loss, they continued to work hard in preparation for their game Thursday against East Hamilton.

Senior Addason Wellington shared, “… our game against CSTHEA went well even though we beat ourselves up in the end.”

The team then hosted the game against the East Hamilton Lady Hurricanes on Thursday. The Pounders lost the first set 25-7. The team continued to play their best, but lost the next two sets 25-19, and 25-16. Even with this close game, the Lady Pounders held their head high for their next game against Hixson High School on September 1st.

“The team was disappointed about the last two losses, but proud of the hard work they put in. They also see where they can grow and are ready to work on those areas in practice,” stated McGrath.

The team played again on Wednesday against the Hixson Lady Wildcats. The team won the first set 25-10 with the first set win, the team was hoping to finish out the game strong. The team then played the second and third set, losing both of them. The final score being 3-1.

Wellington shared,” The game against Hixson went really well for both JV and Varsity, they just outsmarted us in the end.”

Even with the recent troubles, the team is looking forward to playing East Hamilton again September 14.

“The team is growing in their communication and positioning on the court to make sure every ball gets touched by someone. They are also reading to grow in their ability to dig and get after loose balls,” shared McGrath.