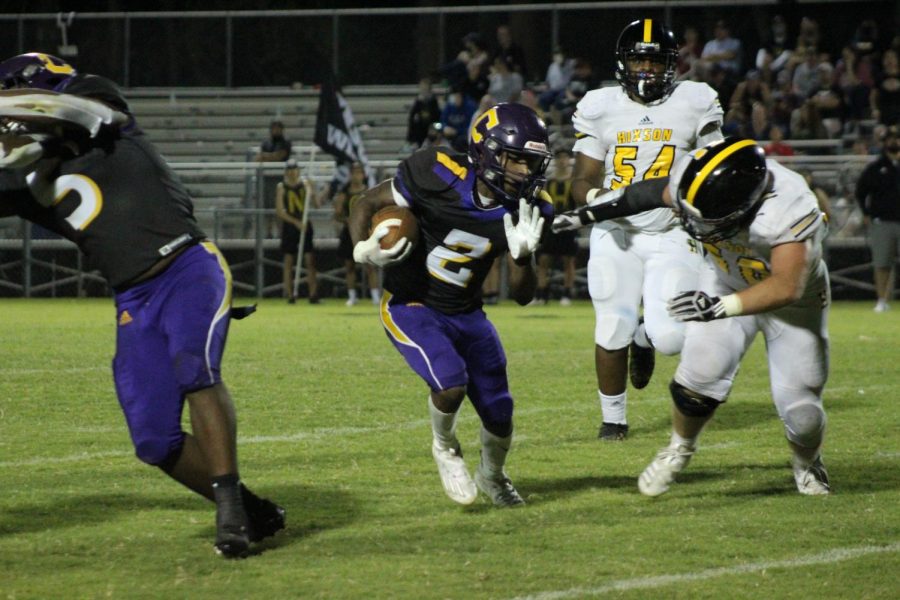 After falling to Hixson 25-6 and 39-38 the past two football seasons, the Central Pounders had revenge on their minds when the Wildcats visited for a 4A-Region 3 matching Sept. 10. The Pounders not only achieved that measure of revenge against Hixson, but they made a statement in a lopsided 40-0 mercy-rule blowout against the out-matched ‘Cats.

“Heading into this game when knew what was at stake,” senior captain Demetrio Dominguez stated. “I’m proud that we fought hard the entire game…”

On Friday, September 10, the Pounders faced off against the district rival Hixson Wildcats. Coming off of the big win on the road versus the struggling Soddy Daisy Trojans, the purple and gold sought to put together a complete game. Friday’s game was just that. With the win, the Pounders moved to 2-0 in the region, and into a tie with Red Bank for first place.

“We were still looking to put together a complete game,” Coaches Jones detailed. “We have relied on our tough defense in the past and that is what showed last Friday.”

Most of the first stanza passed uneventfully, but with 7:16 to go in the first quarter, the Pounders struck first blood. Senior Tyi Mosely returned a fumble for a 35-yard touchdown. That scoop and score was all the spark that the Pounders defense needed. After that, the Pounders shut down the Wildcat offensive attack and put the ball back in freshman quarterback Ronye Watson’s hands. With a little less than four minutes to go in the first quarter, Watson hooked up with Donovan Smith. Smith tapped into his breakaway speed as he went on untouched into the end zone for a 70-yard completion that put the Pounders up 13-0.

To start the second quarter, the hapless Wildcats coughed up the ball again. This time, Senior Reggie Wadley pounced on the loose ball. Back in possession, the offense gashed Hixson once again. Watson handed the ball off to his brother, Michael Watson, who rambled untouched for a 44-yard run. Ronye completed a pass to Noah Collins, who waltzed in to give Central the 21-point advantage.

With less than four minutes before the intermission, and up by three scores, the offense moved confidently down the field. Quarterback Watson capped off the drive with a 24-yard pass to Mosely.

As the time ticked down before the half, the Pounders returned not only one fumble for a touchdown, but two. One of these touchdowns was recorded by Alijah Heyward (15 yards), and the other, by Leandre Henton (62 yards).

The team went into the half up 40-0 and that was all the cushion the purple and gold needed. With the Mercy Rule running clock active in the second half, the Pounders kept the shutout going and driving the ball down the field- just never able to punch it in again.

“This was a really good game for us to grow together as a team and I’m excited to see how far we can go,” Dominguez elaborated.

As the final horn sounded on Etter Farmer Field and Central War Memorial Stadium, the Pounders celebrated their 40-0 victory over the rival Hixson Wildcats.

“We need to continue to finish ball games and take control of the ball,” he explained.

When it was all said and done, Central finished the game with 10 first downs and 284 total yards, 166 of those were on the ground, and the another 118 through the air.

Hixson finished the game six fumbles- four of which they lost. In addition, they put together measly 141 total yards, 68 of those in the first half.

Next Friday, September 16, the Pounders will take on the Red Bank Lions. Central will look to move to 3-0 in the district and add to their win streak.