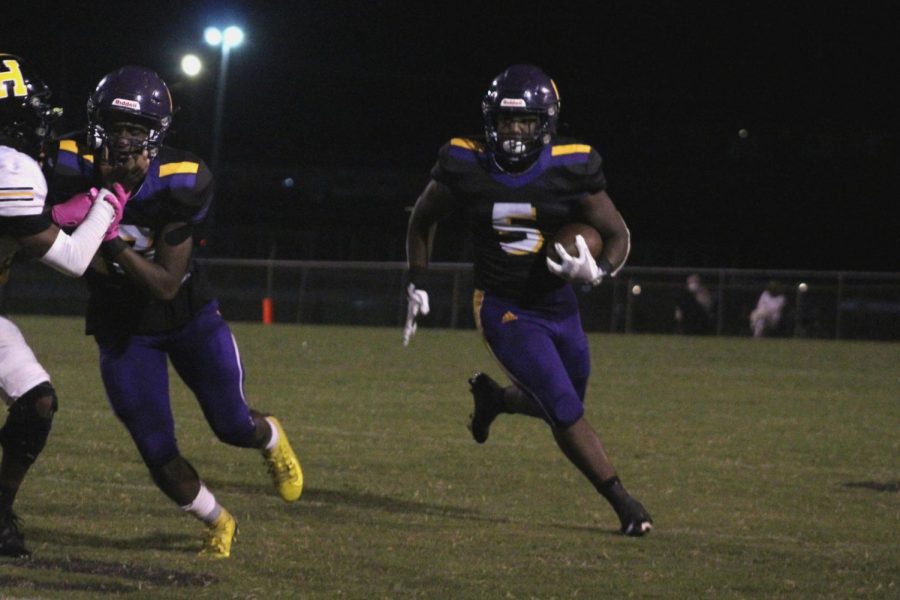 CENTRAL FOOTBALL STUNS THE LIONS WITH WITH BIG REGION 3-4A WIN -- Senior, Michael Watson runs the ball down field to gain a first down against the Wildcats.

As the game began the Pounders set up to receive the kick, team captains and seniors Demetrio Dominguez, Michael Watson, Reggie Wadley, and Noah Collins, stepped to the center of the field for the coin toss. The Pounders won the toss and chose to receive the ball, which meant that the Lions were on defense first. Within the first possession, Donovan ran the ball downfield gaining forty yards towards the Pounder end zone. Later on in the drive, Central turned the ball over to the Red Bank offense. The Pounder defense held the Lions to four downs forcing a turnover where Central capitalized off of the momentum. Quarterback Ronye Watson completed an 11-yard pass to Noah Collins making a touchdown for the Pounders. The field goal was also good making the score 7-0. The Pounders and Lions went back and forth but neither would score again within the first quarter.

Coach Curt Jones stated, “I was very proud of our defensive and offensive efforts.”

The Pounders would receive a punt to regain possession to start the second quarter. Later within the second quarter Red Bank went on to score a touchdown by a 29-yard pass. Putting the Lions at 6 points, although Red Bank went for a two-point conversion making it putting them ahead 7-8. The Pounder defense would continue to fight but their efforts failed and the Lions scored once again by a 9-yard pass along with a field goal. The half ended with a score of 7-15.

Red Bank received the kick-starting off the half making a 35-yard gain. The Pounder defense had the Lions on lockdown recovering two fumbles for touchdowns in the third quarter. Londen made a 5-yard recovery scoring a touchdown along with the Central offense to score a two-point conversion. Alijah Heyward later in the quarter make an 86-yard fumble recovery for a touchdown alongside a two-point conversion. This would put the Pounders ahead 23-15. The Lions threw a 29-yard touchdown up scoring making the score 23-21. Red Bank made an attempt for a two-point conversion, although the Central defense held the Lions with a failed extra-point attempt. As the Pounders went into the fourth quarter the Pounder defense was unstoppable not allowing another point to be scored. Central ended the game in victory formation coming out on top 23-21.

Senior, Michael Watson stated, “It was a very hard-fought game, but all in all we finished strong and got the job done as a team. ”

Week six of Friday night lights is right around the corner; the Central Pounders will go on to face Clinton High School on September 24 at 7:30. This will be the Pounders’ Homecoming game, and the team hopes to see everyone come out to support the Purple Pounders. Students attending are encouraged to sit in the student section as well.