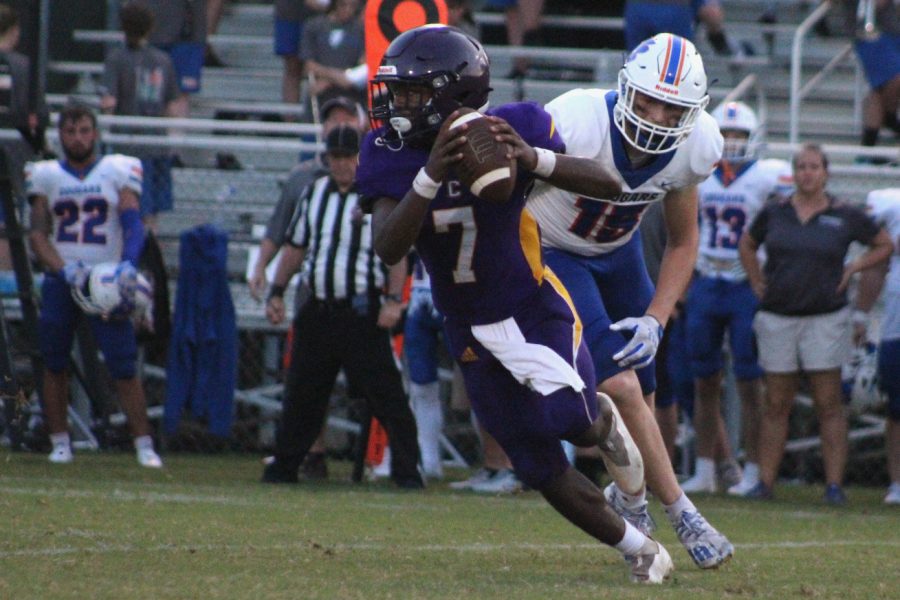 CENTRAL FOOTBALL WINS THEIR FIRST HOMECOMING GAME IN SEVEN YEARS -- Quarterback, Ronye Watson rolls out of the pocket and looks up for a pass.

On Friday, September 24, the Pounders faced the Clinton Dragons for the homecoming game of 2021. Coming off a big district win for the Pounders against Red Bank, Central was prepared to take on Clinton in this matchup. Going into the game Central’s overall record was 3-2. Although this game was not a region matchup the Pounders were ready to go to work.

As the game began, team captains Demetrio Dominguez, Reggie Wadley, Donovan Smith, and Michael Watson stepped to the middle of the field for the coin toss. The Pounders lost the coin toss and the Dragons chose to kick-off.  For much of the first quarter, the Pounders fought back and forth with the Dragons.  Central stayed headstrong opening up for a 27-yard pass to Junior Donovan Smith. The Pounders went for a field goal, making the score 7-0. Although Clinton came back for revenge in the next drive, the Dragons inched their way into the end-zone and made the kick, making the score 7-7.

To start off the second quarter the Pounders fumbled a punt allowing the Dragons to gain possession on the 7-yard line. In the first play of the Dragon drive, Clinton throws up the ball to be intercepted by Sophomore, Tristan Odom. to which he brings it back to the Pounder 13-yard line, making a 76-yard interception. The Pounders came out on fire with Michael Watson making a 14-yard run into the end-zone. The Pounders made the kick getting ahead, making the score 14-7. Clinton fought back hard for revenge but the Central defense held them down, not even allowing a kick through the herd of Pounders. With the Pounders in possession Freshman, Ronye Watson had a breakout play gaining 35 yards. For the next two plays after that Michael Watson came in right behind his brother gaining a first down for the Pounders. The Central offense fought hard but failed to score a touchdown. Clinton worked hard to get in the end-zone, but the Pounder defense would not let it through, ending the first half 14-7.

Senior Michael Watson stated, “This is another week that our defense displayed how good they are in holding other teams down through fumble recoveries, interceptions, and forcing other teams to give up possession. They have become one big unit on the field. As talented as our offense is we at times are not as potent as we need to be. We hurt ourselves a lot of times with penalties and our defense helps us out a lot in that giving us that extra opportunity.”

To start off the second half Clinton received the ball, but the Dragons failed to score the touchdown giving Central possession. The Pounders at the Dragon 21 yard line run to get the first down and fumbled, giving the ball back to Clinton. The Pounder held them on lockdown, gaining possession yet again. The Pounders on fourth down with five yards to go, Central decided to fake punt. Donovan Smith runs the ball into the end-zone for an 80-yard run. The kick is good, making the score 21-7.

The Dragons had possession at the start of the fourth quarter, but both teams fought back and forth. Clinton came back making a 30-yard pass, gaining a touchdown. Along with a good kick, this made the score, 21-15. The Pounder defense remained to hold the Dragons for the remainder of the game, setting the record at 4-2.

“Anytime you get a win, you are excited for the boys and the hard work that they have put in. When you can get the win on Homecoming and it has been that many years since Central has won a Homecoming, it makes it that much more special,” stated Head Coach Curt Jones.

Week seven of Friday night lights is right around the corner; the Central Pounders will go on to face East Hamilton High School on October 1 at 7:30.

This will be the Region championship, and the team hopes to see everyone come out to support the Purple Pounders. Tickets will only be sold online through GoFan. Students attending are encouraged to sit in the student section as well.