Pounder Matmen are Hopeful for the Upcoming Wrestling Season 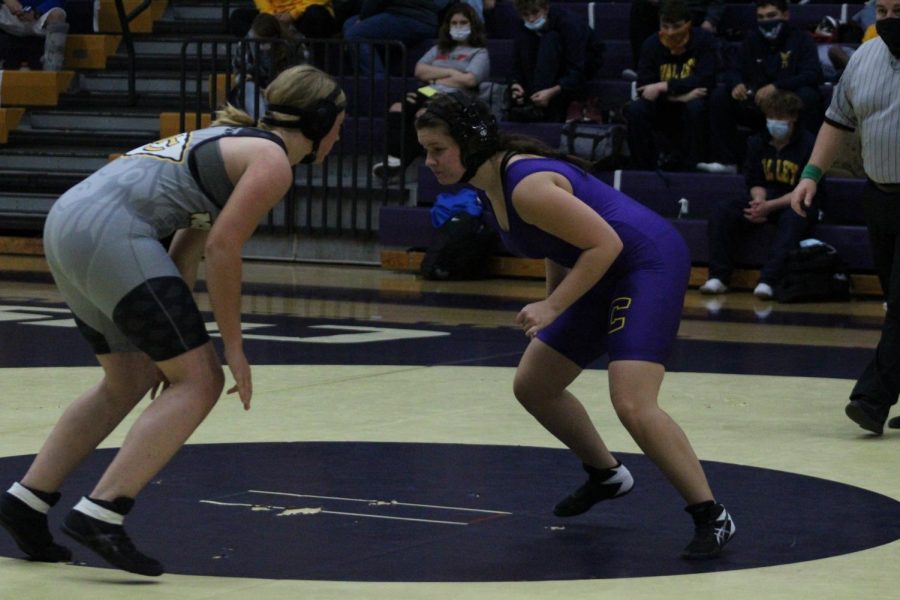 (file photo) -- Gabriella Gray looks to bring down her opponent.

With the winter season peeking around the corner, the Central wrestling team is getting prepared for the upcoming year. After a setback last season due to COVID-19, the team hopes to reach some sort of normality this year. Coach Ryan Mallory is returning for his ninth year and hopes of leading the Pounders back to success to compete for a state championship.

Central has been nothing short of successful with ten consecutive state medalists, as well as a tough battle each year for the regional title. Following a year in which three wrestlers qualified for State and placed second in the East Region Tournament, Mallory hopes for each wrestler to increase their placing and expects nothing short of greatness for each of them. Returning wrestlers include Gabby Gray, Randall Gray, and Noah Pinion, all of whom reached State. The teams, both boys and girls combined, consist of five seniors, four juniors, five sophomores, and five freshmen, allowing for nearly a full roster on twelve out of the fourteen weight classes.

The senior leadership on the team will prove to be essential for a successful run. Coach Ryan Mallory holds the upperclassmen to a higher standard, and fully expects them to be leaders for the upcoming wrestlers. The biggest goal for Mallory being the noticeable improvement in the participants on his team.

“I want our older, more experienced wrestlers to win at least two matches every tournament; if they can do this, they will accrue enough experience to advance through the region, sectional, and state tournaments,” explained Mallory,  “I want our newer, less experienced wrestlers to become competent wrestlers. I don’t measure their success by wins and losses; rather, I evaluate their progress over the course of the year. As long as they are improving each week, they are being successful.”

Senior Caleb Yglesias is also excited for his ultimate year here at Central. He is focused on improving off of a solid first two years on the team, and making his family, teammates and coaches proud.

“I feel great about the upcoming season. I feel very confident that I will be able to capitalize on my past success and I am very excited to finally get back into my passion,” disclosed Yglesias, “Although I did not wrestle last season, I feel like my performance during my sophomore year exceeded my expectations. I noticed a great improvement from freshman to sophomore year, and I am striving to see another big leap this year.”

Coach Mallory has one big goal in mind: to put together as complete and competent of a team as he has ever had in years prior. Although wins are a coaches desire, Mallory ultimately wants to bring the best out of his wrestlers, hoping for any improvement to build on for the years to come.

As the season nears, Mallory is preparing his team both in the mental and physical aspect of the sport. Practices are held from 2:45 until 5:00 everyday after school in the wrestling room, and will continue to do so until the conclusion of the season. The first meet of the season is on Tuesday, November 30th at 6:00 in the gym.