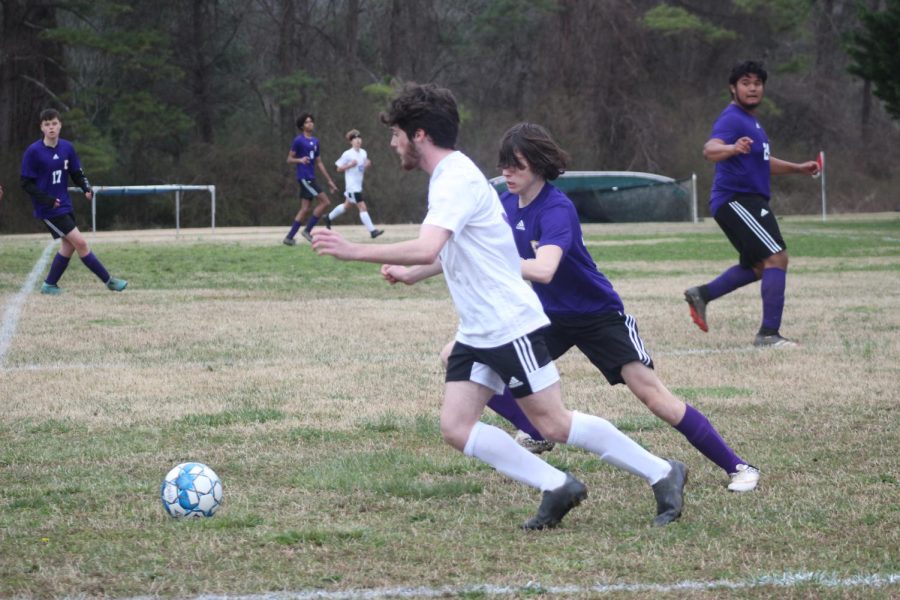 MOVING THE BALL -- Freshman Cayden Hicks steals the ball from a Sequatchie County Indian in a 6-0 loss.

After a long wait, the Central Pounders soccer team finally got to take on the Sequatchie County Indians on March 15 to start the 2022 season. The team had been preparing for the start of the season for the past few months. Central had high hopes for the game, but lost 6-0. The Pounders then took on the Hixson High School Wildcats on March 24. With heads high from the past game against Sequatchie County, the Pounders were ready to win. The team pushed through the match, but again lost with the score of 6-0.

“The game against Sequatchie County was played decently. Sequatchie is a good team, but the team pushed through and finished strong,” explained Pounders coach Trevor Brittingham.

The Pounders got to play on their home field against Sequatchie County, but that was no help. The first half of the match was going well for Central with defense playing strong. Seniors Demetrio Dominguez and Junior Jose Cortes played well during the game and kept the ball away from the goal. The Indians quickly moved across the field and by the second half of the match had scored three goals.

“I feel we played well during the Sequatchie County game. Since it was the first game of the season, we were just getting our foot in the door and learning to work as a team,” shared Junior Jose Cortes.

“The team played very well against Hixson. Sadly we lost due to Hixson being a strong team, but the team did not let this discourage them,” he said.

Readers can view the latest sports updates on the sports center page. This is where schedules, scores, and rosters will be posted. The Digest will continue to bring the latest coverage and updates as the 2022 season progresses.