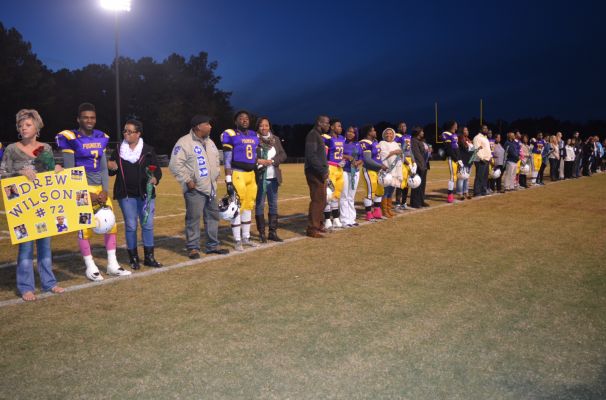 Although the Central Pounder football season did not exactly go as planned, the team ended the season with a special ceremony for the graduating seniors. There were ten seniors this year who helped carry the team throughout the season. Even after a tough loss to Cumberland County on Friday night (20-14),  the guys have nothing but great things to say about each of their teammates.

“I’m really going to miss playing with those guys. It didn’t matter what grade we were in or if we won the game – it was just a great feeling to be out on the field with my brothers,” said senior linebacker James Walker.

Though the varsity’s record was 0-10, the junior varsity went undefeated their entire season.

“The next few years should be different. I honestly hope this was the ‘turnaround’ year. I believe this losing season will be motivation for the younger guys to do better. They really have the potential to do something great if they want,” commented senior right-tackle Ashby Wilson.

Overall, the seniors enjoyed their final season together. Even through the ups and downs, they all agreed that they will miss their teammates the most, and each senior sees a better future for the rest of the team.

“In the next few years, I want the team to remember that each player has a job. As long as each guy does their job to the best of their ability, they will make it to the playoffs. I know they will,” concluded graduating quarterback Taven Spann.