The Lady Pounders Prevail Against The East Ridge Pioneers 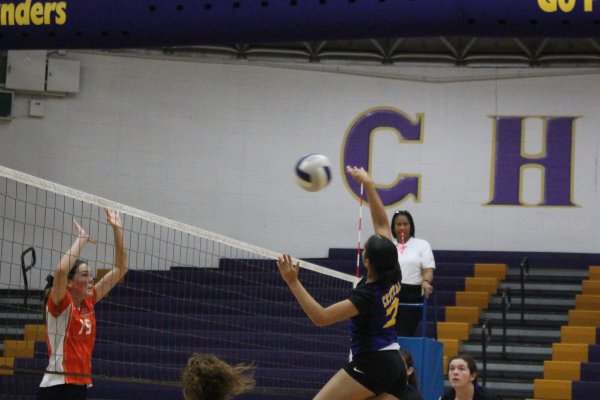 The Central Pounders and the East Ridge Pioneers have been rivals for as long as anyone can remember. This rivalry shows in every sport they play whether it is basketball, football, or soccer. However, it especially shows in volleyball.

The game between the two volleyball teams had a lot riding on them, as this match-up was a district game, where teams in the district play again after having played once before. After a district game, they are left with a record for the tournament at the end of the season.

The Pioneers fought hard as their JV (junior varsity) team went against the Lady Pounders. The Pounders worked together and beat them in the first set. They came with a well executed plan, which lead to the Pioneers’ defeat. Putting the JV team up with two and the Pioneers with zero, thus ending the game for the JV Lady Pioneers.

That win for the Pounders set the game for the two Varsity teams. Heading into the match the Varsity Lady Pounders were ready. They started off the first set pretty slow, beginning the game with a four to four tie. Eventually, the Central team took the lead leaving East Ridge behind, therefore the first set ended with the Pounders pulling away with the ending score of 25 to 13.

The Pounders were excited to have such a lead, but they knew they only had to come harder and keep the focus. At the beginning of the second set the Pioneers were well and ready, starting the set off with a couple good serves. After going back and forth between the teams, the game became a battle to who could make better plays, pushing the Pounders in the lead. However, it was short lived because the Pioneers came back and scored leaving the game at a 24 to 24 standoff. Ultimately, the Pounders pushed those two points leading to the end of the second set giving Central the two-game win over the Pioneers.

Going into the last and final set the Pounders felt great and accomplished, but they knew that they had to be focused to bring the game home. The Pioneers definitely struggled with the last set of the match. They missed a lot of serves and also struggled to communicate. After a battle with themselves, the Pioneers just could not pull through, which ended the last set between the Lady Pioneers and the Lady Pounders with a score of 25 to 15.

The team, as well as the coach, were very excited to have pushed through that game against such big rivals.

“I’m extremely proud of their teamwork, their passion, and their endurance,” explained Holly Ware, the head coach of the volleyball team.

The Lady Pounders worked extremely hard until the very last point. They showed that no matter what issues the team may have; they are dedicated to each other. After the amazing sweep, the Lady Pounders just upped their record for the district games to come.

“We are now two and one in district games,” stated Coach Ware.

The players were very pleased with themselves and their teammates.

“I feel great; it feels amazing to win!” exclaimed Zariah McDonald, the senior Libero on the team.

The Lady Purple Pounders have worked so hard to get to where they are now. The school and the team recognize their hard work and this small win will set the mood and determination for the next game to come.

“I’m glad that we pushed them and [ it feels like] we have accomplished a lot,” concluded McDonald.