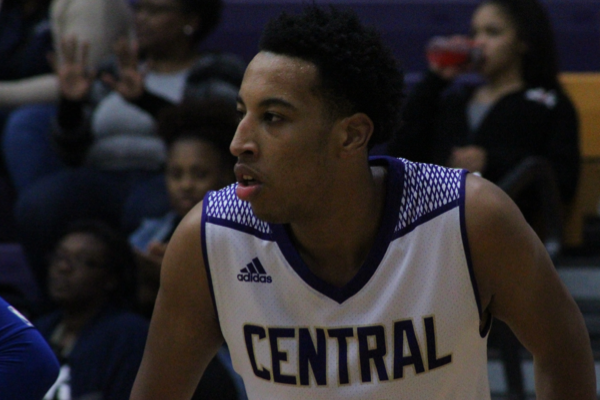 ATHLETE SPOTLIGHT: ALFONSO FEW LEADS UNDERCLASSMEN THROUGH HIS COMMITMENT AND HARD WORK -- Alfonso Few is standing as the Soddy Daisy Trojans shoot a free throw after a foul.

Alfonso Few has played at Central High School for two years. Alfonso plays as a forward; this season is his second season on the basketball court as a Purple Pounder.

Coach Kantonio Davis is the new boys basketball coach this season. He has worked with the Pounders for the past couple of months not only in season, but in preseason practices to train the basketball team before season. Though he was not coaching in the preseason, he looked at the players as they practiced, seeing their work ethic before the tryout date.

“Alfonso is at practice daily. Commitment is one thing that we try to preach, and now, as the season progresses, the upperclassmen are starting to get it,” stated Coach Davis.

Over the course of the season, Few has accumulated in total 8 points, 6 rebounds, and 3 blocks. Being on the Central High basketball team has helped Few open up to other students, talking more and being more sociable. Davis has seen him grow as a player by being more vocal and communicating more amongst his teammates.

“Playing for Central High School has made more more family oriented than I previously had been. It has given me a brotherhood to surround me and make me a better person,” stated Few.

In the future, Few, wants to always become the better man, striving to be faster and have a consistent jump shot. The opportunity to represent his school has changed him by presenting him with more opportunities. His achievements have paved the way for options that may allow him to step outside of the box and make a name for himself outside of Chattanooga, Tennessee. In this season, the Pounders plan on going to Murfreesboro, Tennessee, to the state basketball tournament. Few plans to put his all out on the court, putting everything on the line for the brotherhood that surrounds him.

You can keep up with Central High boys basketball team by viewing the latest sports updates on the sports center page. This is where schedules, scores, and rosters will be posted.