GIRLS BASKETBALL MAKES A COMEBACK WITH VICTORIES AGAINST EAST RIDGE AND HOWARD -- Sophomore Alona Allen battles against Howard player as she approaches the net.

The girls basketball team has been working diligently to keep up their work ethic as the season progresses. The Lady Pounders competed head-to-head against Chattooga County and Grace Baptist Academy in two very important games over winter break.

Central competed against Chattooga, from Summerville, Georgia, on December 27, 2019. The girls had been working really hard during their practices to help the newer players get accustomed to the seniors’ methods and game tactics. Although it was a hard fought game, Chattooga came out victorious, having scored 66 to the Lady Pounders’ 48 points.

The very next day, on December 28, 2019, the neutral, non-conference game against Grace Baptist commenced. The girls got off to a rocky start in the first quarter, which allowed Grace Baptist Academy to lead with 13 points against the Pounders’ four points. During the second quarter, the Lady Pounders managed to close the previous, lengthy point gap, however they still only scored five points to Grace Baptist’s six points.

While the first three quarters of the match left the girls despondent, the girls became energized, putting forth their best effort during the final minutes of the game. Although the Lady Pounders managed to top the fourth quarter, scoring nine points to Grace Baptist’s five points, Grace Baptist left the match victorious, ending with a final score of 32 to Central’s 21.

One player tends to stand out in particular, as it has been noted in previous publications regarding the Class of 2019-2020 girls basketball season. 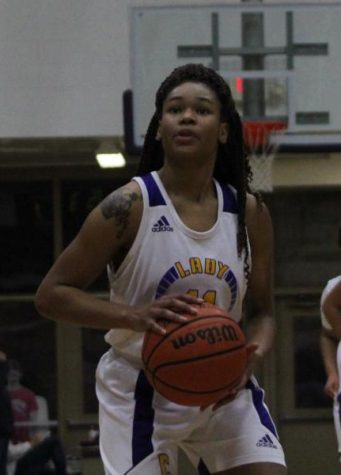 Karleigh SchwarzlGIRLS BASKETBALL MAKES A COMEBACK WITH VICTORIES AGAINST EAST RIDGE AND HOWARD — Senior Ja’Nya West lines up to shoot a free throw.

“[Senior] Ja’Nya West stood out [in both matches],” Coach Rick May stated.

Despite all of the hard work and effort the girls put into both of those games, they ended up coming short, leaving the team feeling a bit discouraged.

“There were not any particularly easy or hard teams to play [during winter break]; [the Lady Pounders] just did not play very well,” revealed Coach May.

On January 7, the girls suffered a stifling loss of 25 to 58 against Signal Mountain. However, on January 10, the Lady Pounders recovered with an amazing victory of 45 to 19 against Brainerd High School. Last Monday’s game against Tyner proved to be a tough fight until the end, Central losing 32 to 36.

The girls traveled to East Ridge High School on January 14 feeling energized. With perseverance and determination, the Pounders prevailed, gaining a huge win of 40 to 14.

The Lady Pounders have continued to play at their best level since they were fueled by high spirits. They ended up overtaking Howard at their home game last Friday with an astonishing victory of 50 to 14.

The combination of practice, cooperation, and confidence helped the girls propel their scores and secure great wins for the season. As the team learns to work better together, they hope to continue to push their limits and bring home more victories as the season winds down.