Central’s Boys Basketball Team Leaves Senior Night Victorious, Having Stepped up Their Defense Throughout the Season 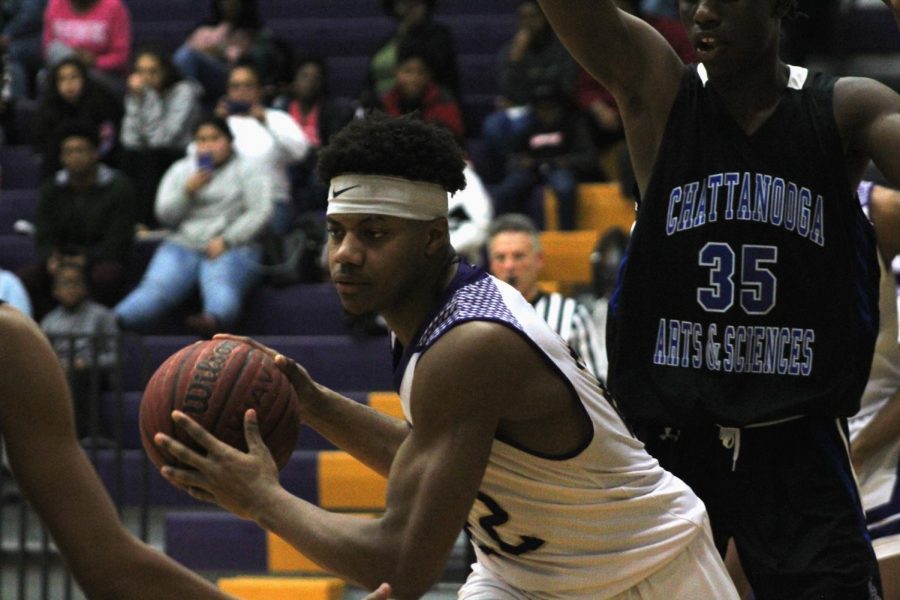 CENTRAL HIGH'S BASKETBALL TEAM STEPS UP AS THE SEASON PROGRESSES -- Senior Isaiah Hayes looks up for a teammate to pass to.

As the season has progressed, the Central High School basketball team has gotten better and better, growing more together, as a team. Towards the beginning of the season, they were playing like individuals not clicking together as a team. There were also many small details of the game that the team could improve upon. Since the beginning of the season, they have heavily improved upon those details.

Going into the game, the boys were confident, but it was the kind that could cripple the team as a whole. Once they stepped unto the court, they knew that they were going to win. But they did not play to the best of their abilities, although they did improve upon the small details of the game.

“Focusing on our defense is something we can always improve on. Along with staying solid mentally throughout the game,” states Senior, Tavarus Grayson.

One game-changer was that they started out playing the third quarter and allowing the competition to overpower them. Eventually, they maintained a strong energy the whole game. The bench played a huge part in this, keeping the boys excited and hungry to play. Overall, they finished the game against Signal Mountain with a score of 47 to 39, winning the game for the Pounders.

The next game was against Brainerd High School on Tuesday, January 28. This was the first game that the team truly left all they had out on the court. Coming into the games, the boys were really eager and ready to play. Going all out with a lead of 10 points. The whole team really stepped up in this game. Defense really stood out in this game.

In the home stretch, it came down to what team wanted it more. It began to click that, in order to win, they had to be able to stop the opposition from shooting. When it began to get tough, the team did not surrender. But, the team gathered together and knew that when they played together that they could beat anyone that stepped on the court in front of them. Consequently, the Pounders lost the game 59 to 77. While they may have lost, there was a vast improvement from where they had came from. 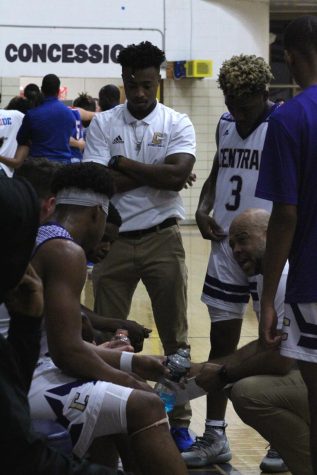 Karleigh SchwarzlCENTRAL HIGH’S BASKETBALL TEAM STEPS UP AS THE SEASON PROGRESSES — Coach Kantonio Davis calls a timeout to talk to the team.

The game that would follow would be senior night, where some seniors may never play basketball again after high school. On Friday, January 31, the Pounders showed up to play the CSAS Patriots. Entering the games, the boys were focused and hungry, ready for whatever may stand in front of them.

There was a realization to stay in front of their man. The boys rose to the occasion, beginning to play more together as a whole team. Seior Isaiah Hayes was an important player in this game. Everything started to click for him. All the practice made him to get low, focused, and going to work. Finishing the game, the Pounders overcame,, winning 46 to 39.

Assistant Coach Tray Martin stated, “The student section really stepped up for the team this game. When they showed up, the seniors went in. Even though they don’t necessarily have the experience, they played for the crowd, which helped a lot when the game was close.”

As of now, their overall record is 8 to 11, while their district record is 6 and 6. Readers can view the latest sports updates on the sports center page. This is where schedules, scores, and rosters will be posted.