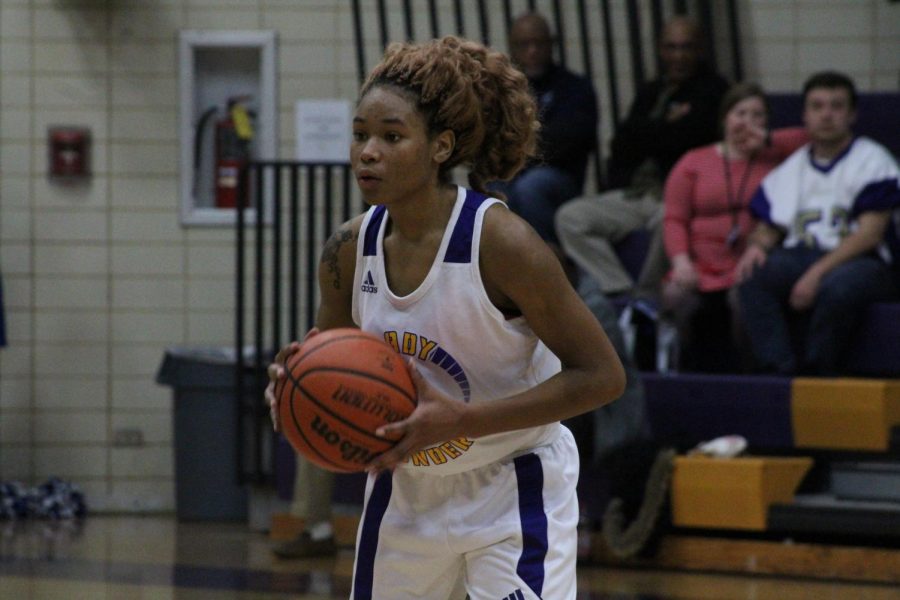 CENTRAL'S LADY POUNDERS HOLD ANNUAL SENIOR NIGHT ON GAME AGAINST CSAS -- Senior Ja'Nya West is on the court during Friday's game against CSAS.

Central’s Girls’ Basketball team is continuing hard and strong into the latter end of their regular season. Last week they played games against Brainard and CSAS, with the game against CSAS doubling as the annual Senior Night.

“Senior Night is a big game, usually against a rival. It is where we come together to support our seniors during our last home game. It shows them how much we enjoyed the season with them and how much we will miss them,” explained Sophomore Alona Allen.

Central’s Lady Pounders started the match week playing their away match against Brainard High School on Tuesday, January 28. The upper hand went back and forth throughout the entire game, but Central held on and powered through for the win. All of players on the team helped tremendously as the Lady Pounders sealed their seventh victory of the season with a score of 39-33.

“The Brainerd game was exciting and down to the final minutes, but the team held on for the win.  All players executed when we needed them to,” shared Girls’ Basketball Coach Rick May.

After the game was finished, the two seniors on Central’s girls’ basketball team, London Vaulx and Ja’Nya West, were honored and recognized as a part of Senior Night. This night of recognition happens every year with every sport. Senior Night happens on the last home game of the respective season. The seniors are recognized and their commitment to their team is celebrated as they end their final season; it is a bittersweet send off.

“I’m proud of how much we’ve grown as a team,” stated Ja’Nya West.

The Lady Pounders are working hard to finish the season strong. According to Coach May, the girls will finish fifth in their district and will start taking part in the district tournament starting on the week of February 10.