Central Football Takes a Loss to Baylor in Week Four 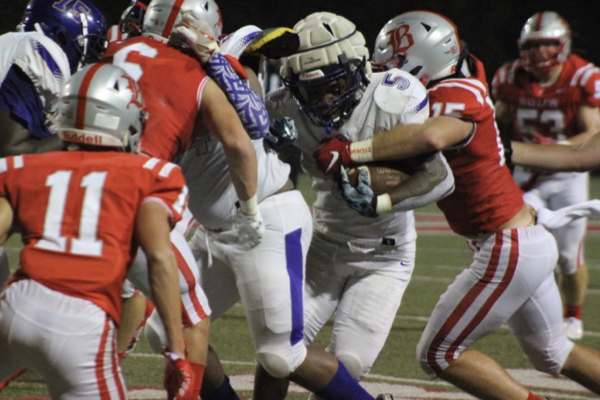 CENTRAL FOOTBALL TAKES A LOSS TO BAYLOR IN WEEK FOUR -- Junior Michael Watson fights through the Raiders' defense to push the ball forward.

On Friday, September 11, the Pounders made their way to the Red Raider Stadium, where they would play Baylor in week four of Friday night lights. This was the first game of the season for Baylor, which meant Central came into the game having studied Baylor’s film from the previous season. Although, the Pounders did have game experience on their side. Baylor is a renowned private school known for their sports programs, so going into the game, the intimidation was there. Subsequently, the Pounders chose to sit in the game and fight.

As the game commenced, the team captain for the night was Junior Tyi Mosley, who stepped to the center of the field for the coin toss. The Pounders started out the game receiving the ball, but when it came down to the offense, they only inched forward and could not get a first down. This resulted in a first down for the Raiders. Baylor continued to push through the Pounders’ defense, earning a touchdown, making the score 7-0. The offense then went in the game and started fighting back. As the series progressed, the Pounders started to gain momentum, but it was not enough to keep the yards rolling. The Raiders continued to push, earning another touchdown. On the next drive, the offense could not carry the ball far, which allowed for a turn over. Then, the Raiders scored yet again, making the score 21-0. Following the third score, the Pounders fumbled the ball on the Raiders’ 20 yard line. Which set Baylor up to score again. This made the score 28-0. The Pounders lost all composure when an interception was thrown on the next drive. This set up the Raiders to score, and in two plays, the score was 35-0.

The Pounders started the second quarter with the ball with Freshman Quarterback Evan Schwarzl and Receiver Tyi Mosley working together very well. The Pounders were relentlessly pushing downfield towards the end zone. With the ball on the 27 yard line, the Pounders threw an interception. As the series progressed, the Raiders scored again. This would make the score 42-0 at halftime.

“Although disappointed in the overall outcome I was very pleased by the combination of Quarterback Evan Schwarzl and Wide Receiver Tyi Mosley,” stated Coach Curt Jones.

To start the second half, the Pounders kicked to the Raiders; although, in the end, the Pounders would end up with the ball. The offensive line started to protect well, giving Junior Running Back Michael Watson some running room, resulting in more yardage for the Pounders. However, the Pounders could not reach the end zone, which resulted in a 18 yard field goal attempt. The field goal was good, earning Central 3 points, making the score 42-3. Baylor then got the ball back  and reached the end zone on the first play. The third quarter ended 49-3, with Central in possession.

The Pounders slowly lost possession and the ball ended back up in the hands of Baylor. The Raiders started pushing downfield. Consequently, Baylor scored another touchdown, making the score 56-3. The Pounders could not push forward in their final possession. In result, the Baylor Raiders beat the Central Pounders, 56-3.

“As a whole I don’t feel like we played one of our best games and [Baylor] took advantage of that. We need to execute better and finish all the way through plays and drives. What did stand out to me was the potential and skill that we showed in the game. At the end of the day we have to walk out on the field with confidence and finish the game,” stated Watson.

Week five of Friday Night Lights is right around the corner; the Central Pounders will go on to face East Hamilton High School on September 18 at 7:30. The team hopes to see everyone come out to support the Purple Pounders. Students attending are encouraged to sit in the student section as well. Tickets to the game can be ordered using GoFan.com.