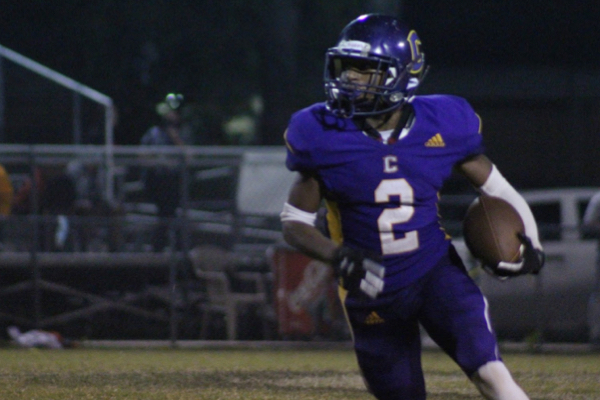 On Thursday, October 8, the Central Pounders played East Ridge High School on their home field. This was Central’s last home game of the season, meaning it was Senior Night. This night holds the seniors’ last moments playing in the Central stadium. This game sat heavily on the seniors’ hearts. The team approached the field with a strong confidence. Fireworks erupted as the Pounders would set foot onto the field to play a challenging game against the Pioneers.

As the game began, Senior Kenny Shadden, the team captain for the night, walked towards the center of the field. The Pounders started out the game receiving the ball. After the kickoff, the Pounders started with the ball on the 30 yard line. Sophomore Perry Armour and Junior Michael Watson ran the ball downfield to gain substantial yardage to start off the first quarter. The team drove all the way down the field and scored a touchdown. This, along with a good extra point, made the score 7-0, with Central grabbing an early lead. Both teams were playing their best, resulting in a back and forth battle between the teams. With the Pioneers in possession, the team held onto the ball and ran the ball into the end zone. This would make the score 7-6. Central were still in the lead due to a missed extra point. Junior Noah Collins made a 21 yard run to finish the first quarter.

Going into the second quarter, the Pounders had possession. Central started off the quarter strong due to the substantial run from Collins. The run not only setting the team up in scoring position, but it also set the tone for the quarter. After a few plays, Michael Watson ran the ball into the end zone, making the score 14-6. After a few plays, East Ridge made a huge run into the end zone. They were also successful in the two point conversion. The score was now tied at 14. On Central’s next possession, they handed the ball off to Noah Collins, who gained significant yardage. However, a bad snap pushed the Pounders back. The Pounders continued to push forward, but they failed to obtain the first down, allowing East Ridge to regain possession. Within two plays, the Pioneers would score again, making the score 14-21. With both teams playing aggressively, the ball went back and forth between teams. The quarter ended with the Pioneers in possession; the score remained 14-21.

Watson stated, “We can improve on focusing at times. When our brains begin to drift off things can seem overwhelming. That’s when we lose ourselves, in reality if we begin to focus we can limit our mistakes. When we focus up results can be 10 times better. So, we need to improve on focusing and finishing.”

To start the half off, the Pounders attempted an onside kick, but it was recovered by the Pioneers. The Pioneers drove downfield and scored another touchdown, making the score 14-28. The Pounders attempted to push forward down the field, but they failed in the end. Freshman Evan Schwarzl was taken out of the game due to an injury and would not play for the rest of the game. Without earning a first down, the Pounders punted the ball. East Ridge quickly lost their possession with a fumble recovered by the Pounders. Michael Watson had to replace Schwarzl at quarterback. The Pounders were pushing down the field, slowly but surely. Towards the end of the quarter, Watson threw an interception. The third quarter ended at 14-28, with East Ridge holding on to their lead.

The Pioneers started the fourth quarter with the ball on their own five yard line. The Pounders held them there and forced a punt. The Pounders had a long drive downfield running the ball. To end the drive, Watson took a quarterback keeper into the end zone for a Pounder touchdown. This would make the score 21-28, with East Ridge still in the lead. The Pioneers started their possession strong and were eventually 15 yards short of the end zone. The Pioneers would fumble the football inches from the goal-line, where Kenny Shadden would recover the ball. The Pounders would end the game pushing towards the end zone, hoping to level the scoring. The game ended at 21-28, with East Ridge winning.

Junior Tyi Mosley stated, “I love how our line came together and played a full four quarters. In the end, we let the clock beat us.

In week eight of Central football, the Pounders will go on to face the Anderson County Mavericks. This game will be an away game on Friday, October 16, at 7:30. You must buy tickets online as no tickets will be sold at the gate. You can find these tickets on ticketspicket.com. Come out and support your Purple Pounders.