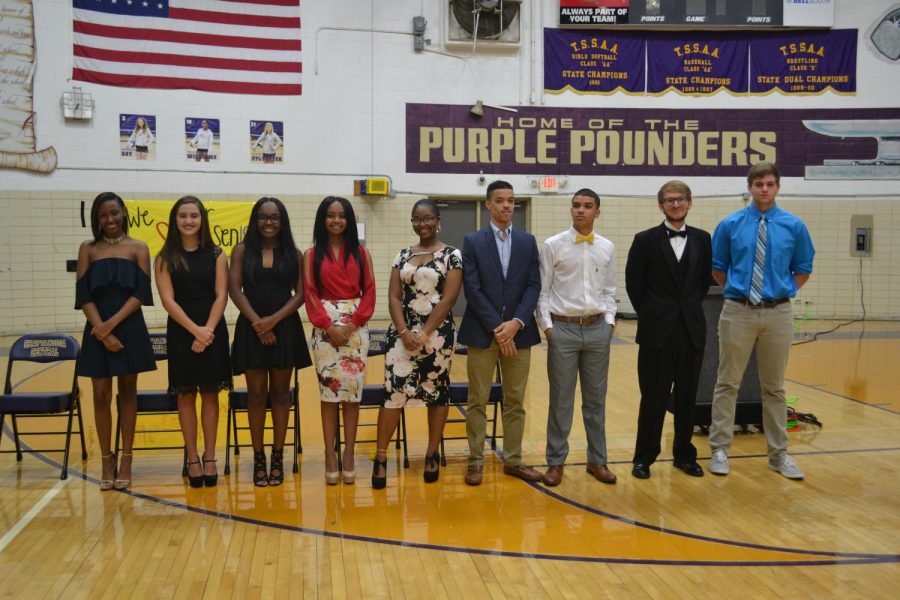 Homecoming is the event that almost all students look forward too, including Spirit Week. From Millionaire Monday all the way to Television Thursday, the students are more than ready to dress up and get pumped for the annual homecoming game at the end of the week. Besides the fact that students get to dress up all week, the seniors are getting more and more anxious to see who will be crowned Homecoming King and Queen.

The 2017-2018 Homecoming court has finally been chosen and this year has a total of 9 nominees, five girls and four boys. The male nominees for this years’ court start off with Senior Jalen Ervin, who has received 3 academic awards, is involved in the National Honors Society of Scholars, as well as Beta Club and has a 4.0 GPA. Ervin plans to attend college and join the US Air Force to become a combat specialty pilot.

Senior Michael Ervin has also been involved in many clubs such as Beta Club, Skills USA, and the 21 club. Ervin also has a 4.0 GPA and plans to attend college followed by joining the Air Force.

Mr. Hayden Lakin has also been chosen for this years’ court. Lakin has participated in several sports such as the Central Football team, and the Central Track team. He has also been involved in the 21 club with a 3.6 GPA. Lakin plans on attending University of Tennessee at Chattanooga and major in engineering.

Last but not least, the final male nominee is Joshua Sizemore. Sizemore is currently the senior class secretary; he is involved in the Central Sound of Chattanooga and is a member of the Beta Club. Sizemore plans to attend the University of Georgia to major in music education.

The female nominees for this years’ homecoming court starts out with Ms. Essence Dandy. Dandy has been a part of JROTC for all four years, earning the leadership award both sophomore and junior year. Dandy has participated in On-Point and plans to attend Austin Peay State University to major in nursing.

Senior Katee Herron has been a part of Central Cheerleading squad for all four years and has been cheer captain for both her junior and senior year. Herron is a member of National Honors Society, Beta Club, and the 21 Club. Herron has also won the academic award for the past three years and has maintained a 3.89 GPA. After high school, Herron plans to attend Lee University to major in Nursing.

Senior Kania Ricks has been a part of JROTC for three years and has participated in on point for all four years. Ricks has been awarded the academic award all four years and has been involved in several clubs such as National Honors Society, Beta Club and the 21 Club. After high school, Ricks plans to attend a four year university to major in biology in hoped of becoming a pediatrician.

Ms. Zaria Spencer has been a part of the Central Cheerleading team for two years and the JROTC Drill Team for three; Spencer has received the academic award for the past three years and has maintained a 3.9 GPA. After high school, Spencer plans to attend a four year university to major in business marketing or nursing.

Lastly, the final nominee for the court is Madison Young. Young has been a part of On-Point, the Superintendent’s Youth Council and has been involved in Beta Club. Throughout high school, Young has maintained a 3.56 GPA and has received the academic award for the past three years. After high school, Young plans to attend Bryan University and major in business and minor in psychology. Following Bryan University, she plans to attend Belmont College of Law to practice corporate and family law when completed.

Homecoming is what a lot of people wait for their whole high school career and some of the senior nominees could not be more thankful about being chosen.

“I feel completely honored and humbled for being nominated because that’s something I can keep with me for the rest of my life, I really feel like I’m a great advocate for my senior class,” explained Sizemore.

Some of the nominees spoke up about what they are looking forward to most about this years’ homecoming.

“I’m just excited to get dressed up and ride around in the convertibles,” exclaimed Herron.

“I’m mostly looking forward to being on the field and having all my friends and family cheering for me, even if I win or don’t,” shared Sizemore.

After all the things the seniors were involved in, Herron explained what she would miss the most about Central after she left.

“What I will miss the most about Central is how much the teachers care about us and how they want us to succeed,” stated Herron.

Best of luck goes out to all the students representing their senior class during this years’ homecoming!