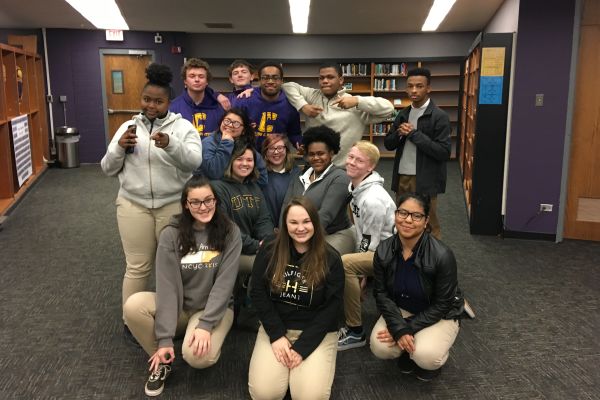 PREPARING FOR ALICE IN WONDLERLAND-- The Theater II students are preparing to perform their play, Alice in Wonderland.

Not many students get to experience the excitement of seeing a play being put together. However, a few select students at Central get to see one come together and be a part of it.

The production includes many talented students who are enthusiastic about drama and are proud to perform.

Junior Jacob Sylman, a student in the class, is playing the Frog Footman and Gardener Number Seven in the play.

“The teacher, Mrs.White, is so intuitive on what we do everyday. She helps so much and keeps us all together. The class lets you be yourself in many ways,” stated Sylman.

Sally White, one of Central’s English 10 teachers, is the drama club’s adviser, believes that the production will be not only nostalgic, but also a wonderful opportunity for students to bond with their characters.

“We had to make a few changes, but it still works as far as being true to the characters we all know. It’s just sort of a fun, nostalgic piece of drama, I think it’s going to go over well,” said Mrs.White.

The students and faculty planning and participating in the play hope to attract a large crowd, but their biggest goal is to give people a show they will not forget. The students involved with the production of the show are not afraid to show their passion for drama and they go to show that everyone can do what they love if they are proud enough to show it.