The Pros and Cons to Social Media in High School 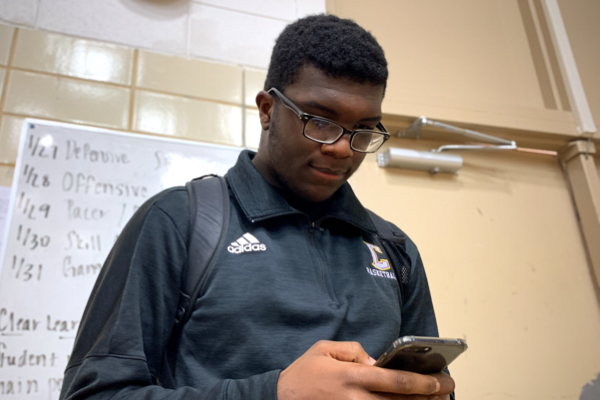 THE PROS AND CONS TO SOCIAL MEDIA -- Junior, Jailon Jackson has his eyes locked on his phone as he stands in the gym.

Social media began its reign 41 years ago when Usenet debuted in 1979. This form of social media was an online news site that enabled people to publish news to various groups. This commenced the ongoing trend of social networking that impacts many citizens now.

Most people use social media as a way to connect with others; it allows users to keep in touch with family and friends who they may not see often. Some people may not be able to physically talk for months or maybe even years at a time, so it is a useful way for anyone to reconnect.

Another positive aspect about social media is that people can talk to others around the world. Before these big media platforms, one might not have been able to understand what someone else was saying because of the language barrier. However, today’s technology allows them to translate languages in real time.

Social media has evolved in many ways throughout the years. For example, Snapchat has a feature which allows you to share your location with the people that befriend you through the application. This shows that technology is rapidly advancing and heavily affecting popular media platforms as well.

Social Media peaks with teenagers, as they are the largest demographic of users. The only downfall to this is that unrealistic body standards as well as false insights to people’s lives are prevalent online, which can lead to insecurities.

Social media can be a major distraction in the classroom. Central High School teachers may have procedures set in place that ask students to put their phone in a hanging, over-the-door, shoe holder or away in their backpack until the end of class, dissipating any distractions that may come about from having cell phones at their seat. Teachers strongly encourage time away from students’ phones because it allows them to make connections with the people in their classroom.

“Putting your phone in an assigned holder helps students to focus on the task at hand.  It is frustrating not having your phone which you normally have on a day to day basis,” stated Sophomore Luke Keown.

In a study conducted by the non-profit group Common Sense Media, it was reported that American teenagers spend around nine hours using entertainment media; children ages eight through twelve spend an average of six hours interacting with media. This excludes time spent at school or on homework.

Central High School’s health teachers have implemented a meditation day. This allows students to have that relaxation time, allowing them to take their eyes off of any device in efforts of helping their minds settle down. They use this time to relax and not think about the troubles that may surround them.

“Social media often times bombards you with information, over-stimulating the mind, which is why I make my students have a meditation day. This is to destimulate their minds. [Despite] whatever may be going on around them, they may be at peace,” concluded Coach Leanne Shurette.