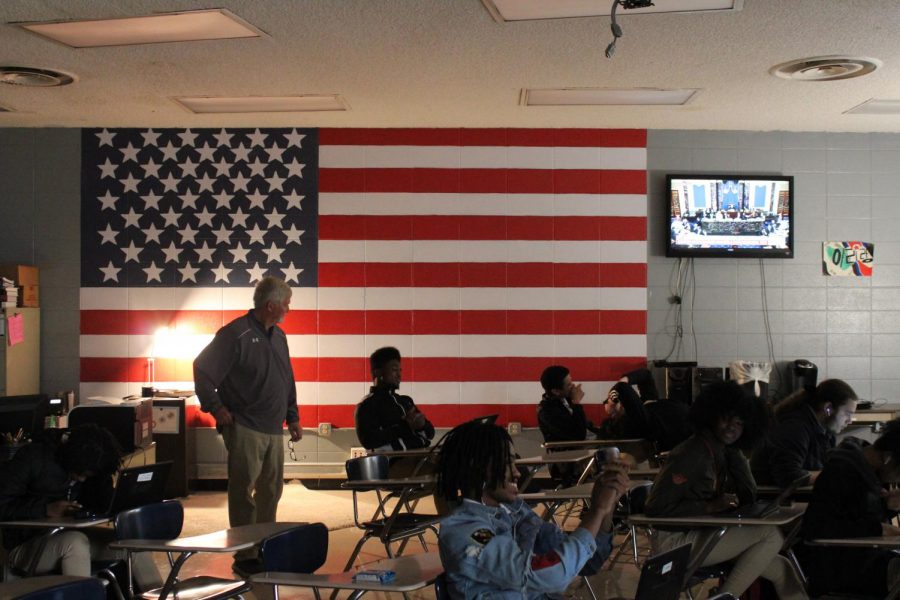 STUDENTS IN TENNESSEE NOW REQUIRED TO PASS CIVICS TEST TO GRADUATE -- Pictured above is a mural of the United States' flag in Mr. Massengale's room, one of the government classes at Central.

Tennessee high school students now have a little more to add on to their graduation requirements. These changes regard the civics test that seniors take every year. Under a 2018 law, students only had to take the test once and they would be done with it, regardless of their score. However, for the 2019-2020 school year, and into the foreseeable future, students in Tennessee must pass the civics test with at least 70 percent of the questions right if they wish to graduate.

“[I] absolutely [agree that students should have to pass it]. It covers everything you need to be a basic U.S. citizen… If immigrants have to pass it to become a citizen, you should definitely have to pass it to graduate high school,” stated James Massengale, Central’s government and civics teacher.

The civics test administered to seniors in Tennessee every year is roughly based on the U.S. Citizenship and Immigration Services naturalization test. Both tests pull from the same set of 100 potential questions. The main difference between these tests is their length, The naturalization test only consists of 10 questions; the civics test is composed of 50 questions. According to Tennessee legislation, the civics test must contain at least 29 questions about American government, 16 about American history and seven on integrated civics. Yes, this adds up to 52 questions for a 50 question test, administration does not know why the question content comes to that total, either.

Tennessee lawmakers decided on this change so that high school students would be more informed on how their government works as well as the history of the nation. As time has passed, the correct answers for such civics questions have been put in the dark in favor of more popular and easier concepts. The requirement to pass the civics test ensures that the original values are not lost as time passes.

“…I think it’s a good thing to have because it’s important for students to have a basic understanding of our country before going out in the world and becoming an active member of society…” shared Senior Mya McCullough.

Less than half the states in the U.S. require some sort of civics test for high school graduation, and many of those states do not demand a passing grade for it. Government fundamentals are more important than people tend to realize. People informed about their nation’s government can be a better judge of the future state of their homeland.

“We put an emphasis on it at the beginning of the year before the seniors took it, and I plan to do the same for the next year’s [graduating class],” concluded Massengale.