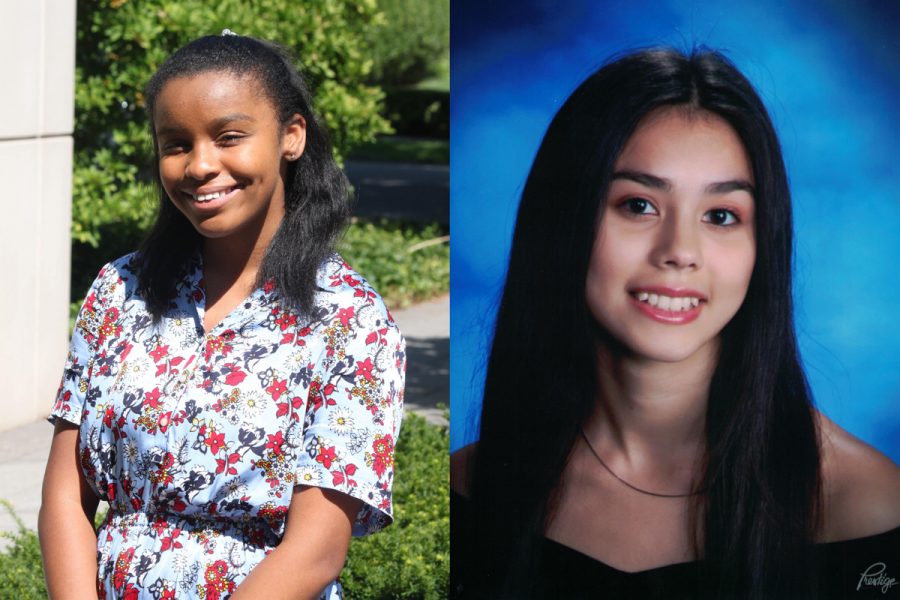 DAYONNA CARSON RECOGNIZED AS VALEDICTORIAN, DANAE WNUK SALUTATORIAN OF THE 2020 SENIOR CLASS — Valedictorian DayOnna Carson and Salutatorian Danae Wnuk discuss their reactions to being recognized as the top of their graduating class.

After years of keeping up with homework assignments and successfully acing the many exams being given, Central can finally say congratulations to the two students who were recognized as the highest academic achieving seniors. The class of 2020 valedictorian and salutatorian were announced on the intercom by Principal Phil Iannarone on February 5, before the post-season winter sport pep rally. The title of valedictorian went to DayOnna Carson while Danae Wnuk was given the title of salutatorian. The couple have worked very hard to get to where they are now; they were top ranked as a result of their continuous academic achievements prior to high school and now. They have been close friends since middle school, so having achieved this together was a true success for the both of them.

“When my name was announced, I felt a sense of relief. Life is unpredictable, so I never expect things to always happen the way I think they will,” said Valedictorian DayOnna Carson. “I had my suspicions about being at the top of the class, but I never felt certain about my position, as there are many other intelligent students here. I know that I always do my best to get my schoolwork done in the most quality manner possible, but I never automatically assumed that would warrant me the title of valedictorian. I think it’s ironic that I’ve written stories about the valedictorian and salutatorian for the past three years. ”

“I was very shocked because I was not expecting that,” said Salutatorian Danae Wnuk. “I never knew my rank because my transcript always said ‘not ranked,’ so I had no idea where I stood; my friends were all supportive, which I’m thankful for.”

Carson and Wnuk have successfully maintained a 4.0 grade point average throughout their high school careers. Carson achieved a composite ACT score of 30 while Wnuk’s highest ACT score is a 27. They have both taken numerous academic honors curriculums, advanced placement (AP) courses, and college level classes, as well as being recognized as intellectually gifted.

“In my opinion, my hard work has definitely paid off. I have spent many sleepless nights studying and making sure that my work is thorough. Having made straight A’s my entire life, I always felt pressured to maintain that level of achievement. I sacrificed a lot to make the time to do my work, which, oftentimes, felt endless, but I guess it has all paid off,” said Carson.

“My hard work paid off, even though that wasn’t my goal. I just wanted to make a 4.0 GPA and graduate,” added Wnuk.

Carson has been involved in numerous extracurricular activities and has received various awards including the Spanish Award her freshman year and the Sewanee Award her junior year. Wnuk has received the Art Award, and the duo have accepted the academic achievement award every year as well.

The two attended the Chattanooga as Text Program their sophomore year and went on to represent Central in the Freedoms Foundation Spirit of America Youth Leadership Summit in Pennsylvania their junior year.

That same year, English 11 teacher and journalism advisor Gregory Cantrell notified Carson of the opportunity to attend Princeton’s Summer Journalism Program; therefore, the beginning of her senior year was spent in New Jersey learning about the college application process, while writing and reporting. She also had the opportunity to tour the University of Pennsylvania in Penn’s Early Exploration Program. During her high school career, Carson has served as junior class president and associate editor of the Central Digest. She currently serves as treasurer of the senior class and holds the title of editor-in-chief of the Digest.

Wnuk, on the other hand, has participated as member of the school’s Chess Club and SkillsUSA. She served as delegate in the Southeastern High School Model United Nations her junior year and is a current staff writer for the Digest. She has played Tennis all four years, serving as captain her senior year.

Carson and Wnuk are members of the National Honors Society, Beta Club, Superintendent’s Youth Council, and Ruri-Teen. They accredit their success to the involvement they had around the school as well as the support from friends and family.

“My friends were always so supportive of me, and always felt like I would be the one to become valedictorian. My friends were very ecstatic when it was officially announced, and I am so grateful that I have the most uplifting, encouraging individuals surrounding me everyday,” stated Carson.

“DayOnna is very hard working and caring; she puts effort into everything she does and that’s why she’s so successful. She acts as if she doesn’t care about making perfect grade when in reality she does care,” stated Senior David Rudek, a close friend of the two. “Danae is very talented and naturally brilliant. She seems as if she’s not trying, but somehow understands things easily. Both are true inspirations.”

Carson has applied to over twenty colleges, including Ivy Leagues. She has yet to hear of admission decisions from all of them, but has received many scholarships from several universities so far including the University of the South. She is a semi-finalist for the Gates Scholarship, so there is a good chance that she will be able to go to the college of her choosing, regardless of the cost. Wnuk plans to pursue a major in computer engineering and plans to study at Chattanooga State to later transfer to the University of Tennessee at Chattanooga to further her education.

Carson and Wnuk have greater academic obstacles ahead of them, but knowing they are able to achieve each of them through hard work and support gives them a sense of relief. Now, the pair plans to create graduation speeches that will enable everyone to make an effort to succeed after high school.

“My advice to others is to try one’s absolute best, despite whatever odds they may be up against, and to cultivate a positive legacy that will live on forever. Celebrate your best efforts while you still can, and never settle for less,” concluded Carson.